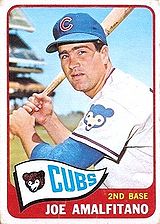 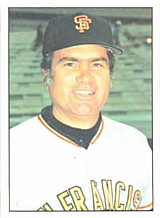 Joey Amafitano has spent more than 60 years in baseball as a player, coach, manager, and front office executive.

Signed to a $40,000 bonus contract by the New York Giants in 1954, infielder Amalfitano saw little playing time in two seasons on the big league roster, going hitless in five at-bats for the 1954 National League champions; yet he still earned a full World Series share when the Giants swept the Cleveland Indians in four games. After some minor league seasoning in the late 1950s, Amalfitano was back in the majors with the Giants, now in San Francisco, CA, in 1960. He had his best year in the majors that summer, hitting with a .277 average in 106 games. Selected by the Houston Colt 45s in the 1961 expansion draft, he spent a year with the team before going back to the Giants in 1963. Following that summer, he played the final four years of his ten-year major league career with the Chicago Cubs from 1964 to 1967 (he was a player-coach the last season).

Following his playing days, Amalfitano spent several years as a Cubs coach, from 1967 to 1971, before returning to the Giants and serving on their staff from 1972 to 1975. After two years as a San Diego Padres coach in 1976 and 1977, he rejoined the Cubs staff in 1978. He managed the Cubs for 7 games late in the 1979 season, and with the team in last place in the National League East under skipper Preston Gomez the next year, he assumed the reins full time. He remained the team's manager for a year and a half before being replaced by Lee Elia prior to the 1982 season.

After spending 1982 on the Cincinnati Reds staff, Amalfitano was third base coach of the Los Angeles Dodgers from 1983 to 1998 under manager Tommy Lasorda. He retired after the 1998 season as the longest tenured coach, with 29 years of consecutive service. Amalfitano rejoined the Giants in 1999 as a special assistant in player development. In 2002, he was named senior adviser to baseball operations for the Dodgers, a position he held for three years. He came back to the Giants front office in 2005. In 2011 he was named Special Assistant, Player Development.

His nephew, Erik Morrison, was drafted by the Pittsburgh Pirates in the 49th round of the 2007 amateur draft.