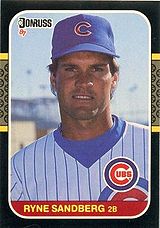 Inducted into Hall of Fame in 2005

Ryne Sandberg is a Hall of Fame second baseman who was a perennial Gold Glove winner, a perennial All-Star team member, a good hitter who broke the career home run record for second basemen, and 1984 MVP in the National League.

Sandberg was born in 1959 in Spokane, WA and went to high school at North Central High School in Spokane, where he was a Parade Magazine All-American as a quarterback in 1977. He was drafted in the 20th round in 1978 by the Philadelphia Phillies.

Former Phillies manager Dallas Green had become the Cubs' GM and knew exactly what he was doing in getting the young player. It would turn out to be one of the best trades in Cubs history. It wasn't that the Phillies thought Sandberg wouldn't make it. Rather, they had been competitive in 1980 and 1981, and wanted to continue to compete. However, their shortstop, Larry Bowa, was 35 in 1981 and aging, and the acquisition of the younger Ivan DeJesus would solve that problem, while Sandberg was not someone who could play that position and they already had All-Stars at third and second base in Schmidt and Manny Trillo. The plan worked for the Phillies, since they won the 1983 pennant and went to the 1983 World Series with DeJesus at shortstop.

Meanwhile, Sandberg became the starting third baseman for the Cubs in 1982, while Bowa played short and Bump Wills was at second base. It was Wills' last year in the majors, and Sandberg took over at second base in 1983 as Ron Cey was acquired to play third base.

He retired the first time in 1994, stating he wanted to spend more time with his family. His marriage was falling apart and he tried to save it by putting a term to his nomadic ballplayer's lifestyle, but was unsuccessful. He came back in 1996 with a renewed interest in baseball, hitting 25 home runs that year. He retired after the 1997 season.

In addition to his home run championship, he led the league in runs scored three times, in triples once, and in total bases once. Defensively, his range was consistently excellent, through 1996. Bill James once called him the only active player in major league baseball who was clearly above average in every category - batting average, walks, power, steals, and defense. Sandberg ranks # 13 on the all-time list for Power/Speed Number. In addition to his 282 home runs, he stole 344 bases, with a very good success rate. He stole 20+ bases nine different times.

Ryne Sandberg had a unique blend of skills - the only other player with similarity scores of at least 900 is Lou Whitaker, but that doesn't take into account all of Sandberg's fielding prowess and so isn't a complete comparison. Although Whitaker was a top player, perhaps a more suitable similarity comparison would be Bobby Doerr, who was also an all-around talent who went into the Hall of Fame.

He was elected to the Baseball Hall of Fame on January 4, 2005 by the Baseball Writers Association of America. Named after Ryne Duren, he is the uncle of Jared Sandberg.

In 2005, his number (23) was retired by the Chicago Cubs. After the 2006 season, Sandberg was named manager of the Peoria Chiefs in the Midwest League. He was considered the favorite to succeed Lou Piniella as Cubs manager when he resigned late in the 2010 season, but coach Mike Quade got the job instead. Disappointed, Sandberg then left the Cubs' organization to move back to the Philadelphia Phillies as manager of their AAA affiliate, the Lehigh Valley IronPigs, in 2011. He was at the helm for two seasons, then in 2013 moved up to the big league team as third base coach. The speculation was that he was now being groomed to take over for Charlie Manuel as the team's skipper within one or two seasons. It would not take that long though as on August 16th, with the team in a tailspin, the Phillies fired Manuel and replaced him with Sandberg as manager. It was not the easiest of circumstances for Sandberg, as the Phils were facing the Los Angeles Dodgers in a three-game series; the Dodgers had been virtually unbeatable since late June and won the first two games by shutout. That made Sandberg just the third manager to see his team shut out in his first two games at the helm, following Jack Chapman of the 1876 Louisville Grays and Mike Redmond with the Miami Marlins earlier in the 2013 season. The two wins meant that the Dodgers had won 42 of their last 50 games, just the third team to accomplish that since 1900. But on August 18th, the Phillies took advantage of a pair of errors by Dodgers SS Hanley Ramirez in the 9th inning to pull off a 3-2 win. At first Sandberg was named manager on an interim basis, but that tag was removed on September 22nd when he signed a three-year contract to manage the Phils. The Phillies ended up playing slightly better under Sandberg's direction, going 20-22 after the change of skippers (they had been 14 games below .500 when he took over). After less than two seasons, however, Sandberg resigned on June 26, 2015 with his team in last place. "I do not like to lose, I hate to lose. I think that's the biggest thing that weighed on me", he explains. He was replaced on an interim basis by Pete Mackanin.

In 2016, Sandberg returned to the Cubs organization as an ambassador for the team.