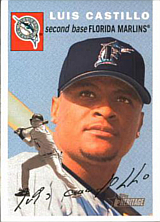 "What he does defensively doesn't surprise me anymore. His defense saves so many runs - it's like he gets what I call 'defensive RBI' every game." - Perry Hill

Luis Castillo was an All-Star second baseman, Gold Glove winner and good leadoff hitter but also one of the worst RBI producers ever. He averaged just 42 RBI per 162 games in his career. His most remarkable season was 2000: in 539 at bats, Castillo batted .334 yet had just 17 RBI, one of the worst RBI seasons in the history of baseball.

Luis is best known for his work with the Florida Marlins, winning a World Series ring in both 2003 and 1997, although he did not see action in the 1997 World Series. Castillo was the batter who hit the foul ball in Game 6 of the 2003 National League Championship Series at Wrigley Field that Cubs fan Steve Bartman prevented Chicago Cubs left fielder Moises Alou from catching with the Cubs leading 3-0 and five outs away from clinching the pennant. Castillo eventually walked and scored as part of the Marlins' eight-run inning. He was a three-time National League All-Star who had five .300 seasons at the plate while twice (2000 and 2002 leading the NL in stolen bases. Luis broke the 100 runs scored threshold once, scoring 101 times in 2000, and had a 35-game hitting streak in 2002. Through the end of the 2003 season and into 2004, he played in 69 consecutive errorless games. After 2005, now making real money, Luis was flipped out of town to save some pennies, moving to the Minnesota Twins for Travis Bowyer and Scott Tyler, two men who never played for the Fish.

Grooving in the Twin Cities, Luis played in 143 consecutive errorless games between 2006 and 2007, breaking Ryne Sandberg's record for second basemen by 20 games. His title run was much shorter than Sandberg's, as Placido Polanco passed him later in 2007; the streaks overlapped for the most part, as Castillo's was from May 30, 2006 until June 5, 2007 and Polanco's from July 1, 2006 into August 2007. With the New York Mets in contention and feeling they were a second baseman away from making a real run at this thing, Castillo moved to Queens for a pair of minor leaguers (one of whom, Drew Butera, would become a big league backup catcher). The Mets inexplicably gave him a four-year, $25 million deal after chunking the 2007 NL East title in horrifying fashion. Luis hit .300 in one season, but will always be remembered in Mets annals for an unbelievably embarrassing gaffe in a Mets/Yankees showdown. On June 12, 2009, the Mets were nursing a 8-7 lead against the Yanks at Citi Field. With the bases loaded and two outs, Alex Rodriguez lifted the laziest of fly balls to Castillo at second base. SNY announcer Keith Hernandez audibly groaned on the call of the game, sensing exactly what happened: Castillo misplayed the ball, two runs scored and the Mets lost, 9-8. After a tough 2010 and a miserable spring in 2011, the Mets cut bait with a year left on his deal. An attempt to catch on with the Philadelphia Phillies went belly up, ending his career.

On August 20, 2019, Luis and former major leaguer Octavio Dotel were arrested in the Dominican Republic and charged with being part of a major money-laundering and drug trafficking ring. They were among 18 persons allegedly part of the network of drug kingpin César Emilio Peralta. A lawyer for Castillo immediately denied the arrest and asked media outlets to retract the story. Castillo was cleared of all wrongdoing.