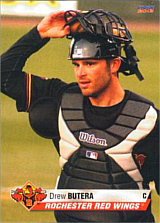 The son of big league catcher Sal Butera, Drew Butera began the journey to follow in his pappy's footsteps when he was selected by the Toronto Blue Jays out of high school in the 48th round of the 2002 amateur draft but did not sign. He was then chosen by the New York Mets in the fifth round of the 2005 draft after hitting .320 as a junior at Central Florida (he did not make All-ASUN). He made his pro debut that summer with the Brooklyn Cyclones, hitting .217/.305/.297 in 55 games. He struggled somewhat with the glove, leading all New York-Penn League catchers with 12 errors (he also led with 8 double plays). He also threw out 47% of attempted base stealers. He spent 2006 with the Hagerstown Suns, batting only .186/.297/.281 with 55 hits in 95 games (with 5 of those hits coming in a single game against the Delmarva Shorebirds on June 10th). He had 21 passed balls and 9 errors in 95 games. He turned 14 double plays, leading South Atlantic League catchers. Butera began the 2007 season with the St. Lucie Mets and hit .258/.348/.418 with 5 homers and 22 RBI in 52 games there before being promoted to the Binghamton Mets in late June and hit .186/.208/.231 in 30 games.

On July 30, 2007, Drew was traded to the Minnesota Twins, along with Dustin Martin, for Luis Castillo. He hit .260/.327/.360 in 17 games with the New Britain Rock Cats. He returned to New Britain to start the next year and hit .219/.308/.354. He had improved his glovework, fielding .991, and cut his passed ball total to 10 in 92 games. In fact, Baseball America named him the top defensive backstop in the Eastern League, which he led with 645 putouts. In 2009, Butera continued to show a weak bat but strong glove, producing at a .211/.268/.292 rate in 99 games for the Rochester Red Wings. He threw out 41.7% of attempted base thieves, second in the International League. He did tie Robinson Cancel for the passed ball lead in the IL with 14, but Baseball America ranked him the top defensive catcher in the circuit.

Butera made his major league debut with the Twins in 2010, making the club as the backup to Joe Mauer. He had hit .214/.296/.317 in 444 games in the minors to that point, indicating that his glove won him the job. In his MLB debut, he got the start ahead of Mauer but struck out three times against John Danks. In his 4th trip to the plate, he executed a sacrifice hit against fellow rookie Sergio Santos. Mauer pinch-hit for him the next time up. Blessed with a great arm, Butera has been used as a pitcher in the majors on a few occasions, always in a mop-up role in a blowout. The first of these came with the Twins on May 20, 2012 when he pitched a scoreless inning in a 16-4 loss to the Milwaukee Brewers. In 2014, the Los Angeles Dodgers called on him twice in the span of a few days, the first coming against the Miami Marlins on May 14th in a 13-3 loss, when he added another scoreless inning to his record. On May 17th, he gave up a two-run homer to Paul Goldschmidt of the Arizona Diamondbacks after taking over for Chris Perez with one out in the 8th; the two runs made the final score 18-7 for Arizona, as they set team records for extra-base hits and runs scored in a game. Drew's dad, Sal, had also pitched in the majors, making it to the mound twice in similar circumstances. On May 25th, he caught Josh Beckett's 6-0 no-hitter over the Philadelphia Phillies; in spite of his limited starting opportunities over his career, it was the second such game he had caught, as he had also been behind the plate when Francisco Liriano pitched a no-hitter for the Twins on May 3, 2011. He was again behind the plate for Beckett's next start on May 30th, where his opponent, coincidentally, was Liriano, now pitching for the Pittsburgh Pirates.

On December 9, 2014, the Dodgers traded Butera to the Los Angeles Angels of Anaheim for a player to be named later. On December 18th, the Angels sent minor leaguer Matt Long to the Dodgers to complete the deal. After hitting .190 in 10 games for the Angels, Butera was designated for assignment on May 4, 2015. Three days later, he was traded to the Kansas City Royals for Ryan Jackson. He got to be a part of the Royals' first championship season in three decades, backing up starter Salvador Perez. Given Perez's durability, it limited Drew's playing time. In 45 games, he hit .198 with a homer and 5 RBI in 86 at bats. He was behind the plate for the last out of the 2015 World Series against the New York Mets on November 1st, as Perez had been replaced by a pinch-runner in the top half of the 10th inning of Game 5. After the Royals scored the go-ahead run, Butera caught the final half-inning of the game. He was back with the Royals in 2016 and, in addition to his catching duties, he was the go-to guy for manager Ned Yost when he needed a position player for mop-up duty in a lopsided loss. He pitched one scoreless inning in a 13-5 loss to the Houston Astros on June 25th, and another third of an inning to finish a 13-0 loss to the Angels on July 26th. Drew played parts of two more seasons in K.C. before playing 26 games with the Colorado Rockies over 2018 and 2019.