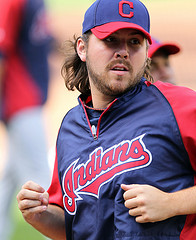 Pitcher Chris Perez was selected by the St. Louis Cardinals in the supplemental first round of the 2006 amateur draft with the 42nd overall pick and was signed by scout Steve Turco. He made his pro debut that summer with the Swing of the Quad Cities, going 2-0 with a 1.84 ERA and 12 saves.

In 2007, he went 2-1, 2.96 for the AA Springfield Cardinals and the AAA Memphis Redbirds, saving 35 games in 54 outings, with 77 strikeouts in 54 2/3 innings. Chris was with Team USA for the 2007 Baseball World Cup and allowed one run in two innings as the team's least-used player. They became the first US team in over 30 years to win the Baseball World Cup.

He started 2008 back with Memphis, but was called up for his first taste of the major leagues in mid-May. He went 1-1, 3.20 with 11 saves in 26 games for the Redbirds. He was with the Cardinals from mid-May to mid-July, went back to Memphis for a time, then returned to St. Louis for good in early August. In his major league debut on May 16th, he pitched a scoreless inning against the Tampa Bay Rays, then was credited with his first major league win in his next appearance two days later, also against the Rays. Overall, he was 3-3, 3.46 in 41 games with the Cardinals, with 7 saves and 42 strikeouts in 41 2/3 innings. He did not do as well with the Cards at the start of 2009, with a 4.18 ERA and only one save in his first 29 outings. On June 27th, he was traded to the Cleveland Indians along with a player to be named later in returned for veteran utility player Mark DeRosa. He got into a further 32 games with the Tribe during the remainder of the 2009 season, with a record of 0-1, 4.32 with a save.

Perez took a big step forward in 2010 when the Indians made him their full-time closer during the season. He was dominant in 63 games, posting a sparkling 1.71 ERA, with 61 strikeouts and 23 saves. In 2011, he was named to the All-Star team after the Indians began the year leading the AL Central. He set a personal best with 36 saves, although his record fell to 4-7 and his ERA rose to 3.32. His strikeout rate continued to fall, as he struck out only 39, with 26 walks, in 59 2/3 innings. In 2012, he got off on the wrong foot in spring training when he pulled an oblique muscle in his left side while throwing his first mound session of the year on February 26th. He explained that he had been going 100% before his body may have been ready for the strain, because he does not feel that working in lower gear brings him any benefit. The injury made his presence with the Indians doubtful for Opening Day, but he was indeed ready to go when the season started although the Indians may have wished he was not. In his first outing on April 5th, he came on in relief of starter Justin Masterson with the Indians holding a 3-1 lead over the Toronto Blue Jays in the 9th inning, but proceeded to give up 3 runs to blow the save. It took 16 innings to determine a winner in what turned out to be the longest opening day contest in major league history. He ended up pitching 61 games that year, with a record of 0-4, 3.59, but a career-high 39 saves even though the Indians struggled to win ballgames that season.

In 2013, he had more health issues in spring training, this time a shoulder strain that put him on the shelf on March 1st and threatened to delay the start of his season by some time. The injury meant that he would not be available to pitch for Team USA in the 2013 World Baseball Classic, after having been originally named to the team. He was ready for the start of the season however and had 6 saves with a 0.69 ERA on May 11th. He then missed a week with arm issues, and after coming back, gave up runs in three straight appearances before being placed on the disabled list on May 27th, his ERA having increased to 4.32. On June 7th, he and his wife Melanie were charged with misdemeanor drug possession when police investigated a suspicious package addressed to his home. The package contained marijuana, and when police came to his home, he led them to his stash, consisting of two full Mason jars in his basement; drug paraphernalia was also found in the home. He entered a treatment program mandated by Major League Baseball and was fined $250, sentenced to one year of probation, and was ordered to perform community service in the form of speaking to high school students about the dangers of drugs. With the Indians surging towards a wild card spot in the closing stages of the season, Perez had a number of meltdowns on the mound that created a difficult conundrum for manager Terry Francona with the postseason around the corner: on September 24th, he gave up a pair of solo homers to Dayan Viciedo and Alejandro De Aza of the Chicago White Sox to turn a 3-2 9th-inning lead into a 4-3 deficit, although he was bailed out by Jason Giambi's dramatic two-run pinch homer in the bottom of the 9th. Then in his next outing on September 26th, he came into the game with a 6-1 lead in the 9th against the Minnesota Twins, but allowed four hits including a triple to Alex Presley and a two-run homer to Josmil Pinto, forcing Francona to bring in Joe Smith to end the game, whose final score was a close 6-5 as a result of Perez's incendiary ways. Noting Perez's 7.52 ERA since August 1st, Francona announced the next day that he would no longer be the closer. Worse, on October 31st, the day after the World Series ended, the Indians announced that they had released the talented but unruly reliever.

Perez's relationship with the fans in Cleveland has been rocky. He lashed out at them for not coming to games in greater numbers, and also criticized team management for not signing more free agents. He suspended his twitter account after some controversial comments early in 2013, before he ran into trouble with drug enforcement authorities.

In 2015 he started the season with the Milwaukee Brewers AAA team the Colorado Springs Sky Sox but only played in 9 games before opting out of his contract. While a free agent he was suspended for 50 games for recreational drug use. The Baltimore Orioles signed him to a minor league deal to begin once his suspension ended. During the course of his suspension Perez instead decided to retire.