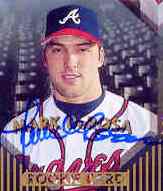 One of the better hitters with runners in scoring position, Mark DeRosa was batting .276 when in that situation through July 18, 2011.

DeRosa announced his retirement after playing the 2013 season with the Toronto Blue Jays, ending a 16-year career with a .268 average, an even 100 home runs and 464 RBIs in 1241 games. He then immediately announced he was joining the MLB Network as a studio analyst.