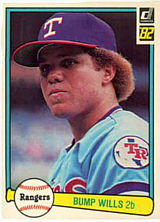 Bump Wills had a six-year career in the major leagues with the Texas Rangers and the Chicago Cubs. His range at second base was consistently above average, and his career batting average was .266. He stole nearly 200 bases in his career, with a high of 52 in 1978. After the 1982 season, he played in Japan for two years.

The son of Maury Wills, he was picked in the secondary phase of the January 1975 amateur draft out of Arizona State University, after having been a three-sport athlete at Central Valley High School. He appeared twice in the College World Series finals. His time at Arizona State (1972-1974) overlapped with that of several future major leaguers including Ken Landreaux, Floyd Bannister and Alan Bannister.

There was a controversy when he was given the second base job in Texas as a replacement for Len Randle. Randle, oddly enough, had been at Arizona State a couple of years before Wills. Randle had hit only .224 in 1976, though, and Wills went on to hit .287 with 28 stolen bases as a rookie in 1977.

At the end of his major league career, Wills played second base for the Cubs at age 29 in 1982, while Ryne Sandberg, in his first full season, played third base. The next year, Ron Cey was acquired to play third, Wills decided to play in Japan, and Sandberg moved to his familiar second base.

He is one of only two major leaguers to play in a major league game against his father as manager (the other is Moises Alou). Toby Harrah and Bump once hit back-to-back inside-the-park home runs at Yankee Stadium.

While in Japan, he played for Hankyu. He later worked in real estate and, in the mid-1990s, spent 10 years in player development with the Rangers. He managed in 1988-1990 with the Butte Copper Kings with whom he won two divisional titles, the Gastonia Rangers in 1991, the Charlotte Rangers in 1992 and in 1995-1996 with the Hudson Valley Renegades. He spent 1993-1994 as a roving infield and baserunning coach. Later, Bump was working with high school players in the Spokane Valley and in Dallas, TX.

In 1979, a baseball card was issued showing that Wills was part of the Toronto Blue Jays. The Rangers had come close to trading him, and Topps, which found out, wanted to get the right name on the cards that were being printed. However, the trade never took place. Topps issued a different card with the correct team, so there are two 1979 Bump Wills Topps cards.