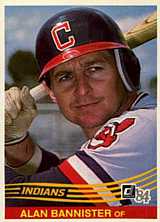 During a twelve year major league career, Alan Bannister played every position but pitcher and catcher.

Originally a shortstop, Bannister was selected by the California Angels in the first round of the 1969 amateur draft but opted to attend Arizona State University instead. He was a two-time All-American for coach Bobby Winkles and MVP of the 1971 Pan American Games, even though the USA won Silver to Cuba's Gold. While participating in a Baseball Federation tour of Japan in 1972, he accidentally struck Japanese player Akira Taumon in the face with a throw while trying to turn a double play. Taumon was knocked unconscious and died from his injuries.

Bannister was the first overall pick in the January 1973 amateur draft by the Philadelphia Phillies and reached the bigs in 1974. Stuck behind shortstop Larry Bowa, he found limited playing time, briefly seeing regular time in center field before the Phils acquired Garry Maddox. He was sent to the Chicago White Sox after the 1975 season in a trade for Jim Kaat and filled a utility role in his first season in Chicago, playing six different positions. When the White Sox traded Bucky Dent prior to the 1977 season, Bannister became the team's regular shortstop. He hit .311 in the season's first half and ended the year with a .275 average but made 40 errors. Slowed by a shoulder injury, he only played 49 games the next summer. He began 1979 as the team's Opening Day second baseman but was moved to the outfield midway through the year. Despite his troubles afield, he put up his best year at the plate, hitting .285 and stealing 22 bases. He moved to yet another position in 1980, beginning the year as the team's third baseman. After hitting just .238, he was traded to the Cleveland Indians for Ron Pruitt in June. He spent three and a half seasons as a utility man for the Tribe before ending his career with stints with the Houston Astros and Texas Rangers.

Following his playing days, Bannister played for the St. Petersburg Pelicans of the Senior Professional Baseball Association in 1989 and hit .307 in 52 games with the club. He also spent five seasons as a minor league manager and was a coach for the Phoenix Firebirds in 1991. He was inducted into the College Baseball Hall of Fame in 2010.