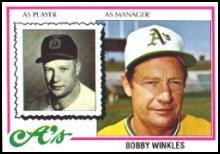 Winkles was born and raised in Arkansas, where his seventh grade teacher was future big leaguer George Kell. After attending Illinois Wesleyan University, he was signed by the Chicago White Sox and made his pro debut with the Colorado Springs Sky Sox in 1951. He missed the 1953 season while serving in the Army during the Korean War. He made it as high as AAA in 1955 and 1958 in seven minor league campaigns, but never played in the major leagues. During his playing days, he earned his master's degree in physical education at Colorado State University.

Winkles became the the first varsity baseball coach at Arizona State University in 1959 and posted a 27-18 record that year. He led the school to their first College World Series appearance in 1964, finishing sixth. The next year, his team posted a 44-11 record and won the College World Series crown. He added additional titles in 1967 and 1969. His 1969 club won 56 games, an NCAA record at the time. During his tenure, Sun Devils players included future big leaguers Rick Monday (the first player chosen in the 1965 amateur draft), Sal Bando, Reggie Jackson, Larry Gura, and Gary Gentry. He remained with ASU through 1971, leaving the school with a record of 524-173.

After his days at Arizona State, Winkles joined the California Angels coaching staff under skipper Del Rice in 1972. He became the club's manager the following year, in 1973, leading the team to a 79-83 record and a fourth place finish. Midway through the 1974 season, he was replaced by Whitey Herzog. He soon moved on to the Oakland Athletics staff in 1974 and 1975. He was then a San Francisco Giants coach in 1976 and 1977 before returning to the A's as their skipper in 1977, replacing Jack McKeon. He resigned as manager the following May, with Oakland in first place (and was in turn replaced by McKeon, who went 45-78 the rest of the way, finishing sixth). He was then a Chicago White Sox coach from 1979 to 1981) and a member of the Montreal Expos staff from 1986 to 1988. He also worked in the White Sox front office in the early 1980s and was an Expos broadcaster for a time.

The field at Arizona State's Packard Stadium was named after Winkles in 2001, and he was inducted as an inaugural member into the College Baseball Hall of Fame in 2006. He died in 2020 at age 90.