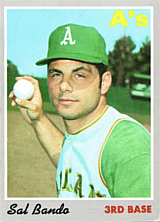 "Sal Bando was the godfather. Capo di capo. Boss of all bosses on the Oakland A's. We all had our roles, we all contributed, but Sal was the leader and everyone knew it." - Reggie Jackson

Sal Bando is best remembered as the third baseman and captain of the "Swingin' A's" clubs that won three consecutive World Series titles in the 1970s. After his playing days, he was General Manager of the Milwaukee Brewers for almost a decade.

Bando played college ball at Arizona State alongside future big league teammate Rick Monday. He was selected by the Kansas City Athletics in the sixth round of the 1965 amateur draft (after Monday was taken by the A's with the first overall pick). After cups of coffee in the majors in 1966 and 1967, he followed the club to Oakland in 1968. After an impressive spring training, he became the team's regular third baseman, appeared in all 162 games, and was elected the club's captain. The next season was even more impressive, as he hit .281 with 31 homers and 113 RBI and was chosen to start the All-Star Game.

Bando held down the hot corner in the early 1970s as the A's went from also-rans to an American League dynasty with stars like Catfish Hunter, Reggie Jackson, Vida Blue and Rollie Fingers on the diamond. The team won three straight World Series from 1972 to 1974 with Bando often providing postseason heroics. In the 1973 ALCS, he hit two homers in Game 2 against the Baltimore Orioles. The next year, as Oakland faced Baltimore in the ALCS again, he clubbed a pair of home runs again, one of which was the game-winner in the clinching game. Prior to the 1975 season, Bando became involved in a bitter salary dispute with A's management and, perhaps as a result, slumped to .230 with 15 home runs. Following the 1976 campaign, he became a free agent and signed with the Milwaukee Brewers.

After two good years with the Brew Crew, Bando's numbers dropped off in 1979. That August 29th, he made his only major league pitching appearance, giving up two runs in three innings, as manager George Bamberger employed three mystery pitchers in an 18-8 loss at Kansas City in an effort to save the bullpen. In his final year in the majors, 1981, he saw increased playing time late in the season as the Brewers made a run at the playoffs. In that strike-shortened year's ALDS against the New York Yankees, he hit .294 as the team's starter at third.

After retiring, Bando was a special assistant to the GM of the Brewers from 1982 to 1991. He was named General Manager of the Brewers in October 1991 and held the position until August 1999, guiding the club to one winning season in 1992. Following that season, Bando failed to offer salary arbitration to Brewer icon Paul Molitor until the absolute last moment it was possible. Molitor, seeing the writing on the wall, promptly signed as a free agent with the Toronto Blue Jays, winning World Series MVP honors as the Blue Jays won their second consecutive world championship.

Bando is the brother of catcher Chris Bando and the father of Sal Bando Jr., a former minor league player and college and high school coach. His nephews, Ben, Michael and Phil all played pro ball. Along with Gene Tenace, Bando had a cameo on a season 17 episode of The Simpsons, "Regarding Margie", airing in 2006.