Note: This page refers to the father. For the son, see here. For the Venezuelan national team member, see here 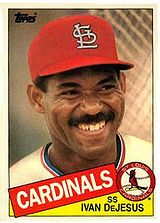 Shortstop Iván DeJesús was known by Puerto Rican fans as "El Pulpo", the Octopus, for his fielding abilities. Highly touted as a shortstop in the Los Angeles Dodgers organization (he was signed by scout Corito Varona, DeJesús was blocked by Bill Russell. Traded to the Chicago Cubs in 1977, DeJesús put in several creditable seasons with the Cubs and Philadelphia Phillies. Although not an outstanding hitter, he was a good handler of the bat who did not embarrass himself at the plate.

DeJesús recorded the first cycle of the 1980s, turning the feat on April 22, 1980, for the Cubs against the St. Louis Cardinals

In 1989, DeJesús played for the St. Petersburg Pelicans of the Senior Professional Baseball Association. He hit .333 in 14 games with the club.

He is the father of Iván DeJesús Jr.