In addition to the 1985 title, Willie also won the 1990 National League batting title in a way that drew a lot of attention. He was traded after playing 125 games with the Cardinals and posting a .335 average. With the pennant-winning Oakland Athletics for the remainder of the season, he hit .274 to end with an overall batting average of .324. Since his .335 average in the 1990 National League was the highest in that league, he won the title despite having only the 6th-best batting average in the major leagues and finishing the season with a lower overall batting average than the player who he beat for the batting title, Eddie Murray, who hit .330 in the National League. He became the only player in history to win a batting title in one league after being traded to the other. 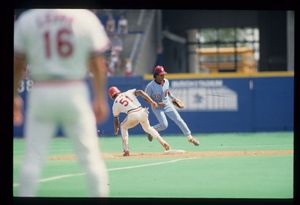 The press liked to note that McGee was a shy, ordinary-type guy who found himself a star.

Willie was born in San Francisco, CA and attended high school in Richmond, CA. Drafted originally by the New York Yankees, he eventually played parts of 10 seasons in the minors, although only five were anything close to complete seasons. In 1981 with the Nashville Sounds, he hit .322 with 7 home runs as a teammate of the young Don Mattingly, who hit .316 with 7 home runs. Mattingly at age 20 was two years younger than McGee. He was then traded to the Cardinals in return for pitcher Bob Sykes after the season. Sykes turned out to be injured and Yankees owner George Steinbrenner was furious that such a talented young player as McGee had gone away essentially for nothing. He threatened to take action to cancel the trade and eventually the Cards quieted him by sending two prospects, Stan Javier and Bobby Meacham, to the Yankees to even things up.

He was a regular in his first major league season in 1982, appearing in 123 games for the Cardinals who won the 1982 World Series. While most of his career was with the Cardinals, he also spent four seasons playing for his home-town team, the San Francisco Giants, for whom he twice hit .300.

McGee was appointed a coach with the Cardinals for the 2018 season.