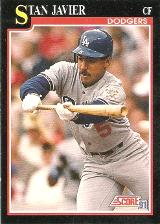 Stan Javier was the first player to hit a home run in an interleague game. Javier accomplished the feat against the Texas Rangers while playing for the San Francisco Giants on June 12, 1997.

He is the son of Julian Javier who starred playing second base for the St. Louis Cardinals in the 1960s. He was given the name Stanley by his father as a way to honor his teammate, Stan Musial. He played baseball and volleyball in high school and also played amateur ball in the Roberto Clemente League. He was originally signed as an amateur free agent by the Cardinals in March of 1981, but after the 1982 season, he was sent to the New York Yankees alongside infielder Bobby Meacham, another good prospect, in return for three minor leaguers of little value. The deal was in fact compensation for the Cardinals having snatched excellent young outfielder Willie McGee from the Yankees the previous off-season in return for sore-armed P Bob Sykes. After McGee had emerged as a star in the Cardinals' win in the 1982 World Series, Yankees owner George Steinbrenner was fuming, threatening to sue the Cardinals for having swindled him out of McGee; the deal was the Cardinals' way of making amends and making sure that Steinbrenner did not use his contacts around baseball to have the original deal for McGee overturned.

Javier made his major league debut with the Yankees at the start of the 1984 season, when he had just turned 20. The story is that Steinbrenner was aghast that the rival New York Mets were getting tons of positive publicity for their two young superstars, P Dwight Gooden and OF Darryl Strawberry, and he wanted the Yankees to receive similar attention. So he brought up young Stan to be his Strawberry and Jose Rijo to be his Gooden. Neither player was ready for the big time yet, so Steinbrenner ended up embarrassed. As a result, he sent the two back to the minor leagues, then traded them to the Oakland Athletics in the Rickey Henderson deal after the season, as a way to hide the evidence of his blunder. It turned out to be a good thing for the two, as in the saner environment that prevailed in Oakland, they were given time to develop properly and became quality major leaguers. Stan ended up playing 17 seasons, as he was valuable because of his excellent speed, line drive hitting and ability to play all three outfield positions very well, even though he never developed into a superstar.

He hit .374 and .363 in the 1987 and 1988 Dominican Winter League seasons, respectively. He led the American League in 1988 in stolen base percentage with 20 steals in 21 attempts. Javier was a good percentage base stealer throughout his career, finishing with a career mark of 82.3% while stealing 246 bases. He was the only major leaguer to start 10 games at each of the outfield positions in 1988 and hit .469 against the Cleveland Indians that year, the highest average against one team by any player that season. As a member of the Los Angeles Dodgers at mid-season in 1990, he was hitting .331. He also had a 13-game hitting streak that year.

After retiring as a player, he bought the struggling Pollos del Cibao team in the Dominican League and had them renamed the Gigantes del Cibao.