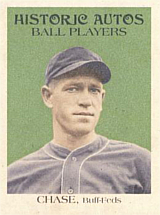 "...one of the greatest first basemen in baseball history..." - from Chase's New York Times obituary in 1947

"His range was incredible. No other first baseman played so far off the bag. As a man charging in on a bunt he was fantastic. He was speed and grace personified." - Fred Lieb 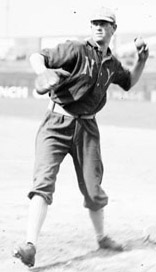 Like John Shaft, Hal Chase was a complicated man. Unlike John Shaft, nobody on the planet really understood Hal's motives except, perhaps, Hal himself. Revered as one of the top first basemen of the deadball era by ballplaying peers and contemporary sportswriters in a fifteen year career, Chase was almost always enveloped in some sort of trouble and washed out of the game at the height of the investigation into gambling and crooked play.

"Prince Hal"'s image was that of the preeminent defensive first baseman of his time, in an era when there were many bunts and squib hits that a first baseman had to be quick to get and handle. He was very aggressive about charging in to pick up bunts.

He arrived in 1905 with the New York Highlanders of the American League, by way of the Los Angeles Angels of the Pacific Coast League where he had dazzled the local fans and press. After an adequate first season with the bat, he made the grade with a .323/.341/.395 line and 84 runs scored in 1906. Finding his salary no longer up to snuff heading into the 1907 season, he held out, threatening to jump to the renegade California League without a proper boost in pay. Once sated, he suited up for 125 games, hitting .287/.315/.357, then announced in the Toledo News-Bee in November: "I am going to play baseball with the California league this winter... and I don't care what the national commission does about it." He went on to add that since the club was not paying him a salary in the winter, he therefore had no obligation to cater to their whims and would do as he pleased. Annoyed, but satisfied with his play on the field, the Highlanders welcomed him back in 1908. Chase rewarded them by doing as Chase does, which is: whatever he wanted. When Clark Griffith was dumped as manager for Kid Elberfeld during the season, Chase held out in protest, then eventually deserted the team to go back to California and play. He was suspended, only to be reinstated after paying a $200 fine.

There was a new skipper in town, one George Stallings. Hal, having felt the job should have been his... held out until May, playing well when he found the time to show up. Still, it was going to be impossible to win a power struggle with Hal. Papers during the 1910 season reported he was unhappy and accusations were made by Stallings that his play was not on the up and up. Both Chase and Stallings made appeals to owner Frank Farrell that this town was no longer big enough for the both of them. Farrell, naturally, gave Stallings the old heave ho and inserted Hal as player-manager for the remainder of the year. The team had a hot finish to the season, 10-4. When they shockingly (or not so shockingly, depending on your viewpoint) came in at .500, 76-76, under Hal's guidance, he was allowed to resign. He at least had a hot season at the plate, batting .315/.342/.429 in 133 games, then had a deafeningly quiet (for him) year in 1912, arousing no suspicions while sliding down to a .274/.299/.372 line.

After a season with Harry Wolverton in charge, the now New York Yankees brought "The Peerless Leader", Frank Chance, into the fold to take the reins for 1913. Perhaps it was the fact that Frank's star shone brighter than Hal's or Hal simply had bottled up a lot of pent up shenanigans that just had to explode on someone. Within months of Frank's arrival, the future Hall of Famer became the latest man to allege Hal was undermining the team. Initially, the sportswriters did as they would for all time: nothing. But when Chance made allegations again, they printed the story. Instead of discipline or any sort of investigation into Chase's activity, now having been accused by two managers of crooked play, he was pawned off on the Chicago White Sox for a pair of warm bodies, both of whom would not be back with the Yanks in 1914. As for Hal, he finished the year with an okay line in 141 games between the two teams (.266/.305/.355).

Hal was all set to play first base for Charlie Comiskey in 1914 when an opportunity to jump to a renegade league, in this case the Federal League, was simply too tempting to ignore. Hal took the Buffalo Blues up on an offer and played both seasons of the club's existence, leading the league with 17 home runs en route to a .291/.316/.471 line in 1915. An incredulous Comiskey took him to court, filing an injunction attempting to bind him to the reserve clause. But it was "Prince Hal" who was one of the few to deliver a blow to the establishment, challenging the injunction and winning. Comiskey, outraged and embarrassed, held this against Chase, effectively barring him from ever returning to the American League. Perhaps it was for the best he did not stay in Chicago; despite his fine play, rumors swirled around things not being on the up and up at Buffalo games, with Chase at the eye of the hurricane.

Normally, with so much smoke enveloping someone and scandal, it would be beneficial to at least do a perfunctory look into this person's activities and come to sort of conclusion that, hey, this guy is doing things he should not be doing, maybe we should do something. Hal once again skated, and when the Federal League died a terrible, terrible death after the '15 season, Hal was auctioned off to the Cincinnati Reds. For two seasons, it appeared he kept his nose clean. In 1916, he won the NL batting title, batting .339/.363/.459 with a league leading 184 hits. In 1917, he led the league in at bats, batting .277/.296/.394. Surprise, surprise, in 1918 Hal was surrounded by more controversy, driving skipper (and universally beloved pitcher) Christy Mathewson to suspend him for the remainder of the season in August. John McGraw, of all people, took up for Chase in the ensuing controversy, bringing him to the New York Giants in 1919 for his final season (.284/.318/.397 in 110 games) before the hammer fell on his good times.

"Chase's methods in throwing games apparently included bribing teammates, paying bonuses to opponents who played well against his team, and a variety of on-field maneuvers. He collected hits at meaningless times to cover himself, and it has been suggested that opposing pitchers who were co-conspirators may have allowed him to fatten his batting average. A favorite trick was to break late in covering first, thus failing to make a catch while seeming to make a good effort, often causing the third baseman or shortstop to draw an error on a perfectly good throw." - Bill James, from The New Historical Baseball Abstract

It is impossible to prove exactly when Chase began his enterprising in the world of tanking games. In print, accusations first came about in 1908, upon his distaste for the promotion of Kid Elberfeld to the managerial throne with the Highlanders. In 1910, George Stallings levied accusations of crooked play and was subsequently dumped to knight Hal manager. Frank Chance, alleging in 1913 of Hal's dishonest play, was only able to get Hal moved to another club, then able to jump to a new hotshot league and make more money.

The accusations levied in 1918 were the first time Hal was truly called upon the carpet to answer for himself. That August, the great Christy Mathewson suspended him and charged him with violating National League Rule 40: "Any person who shall be proven guilty of offering, agreeing, conspiring or attempting to cause any game of ball to result otherwise than on its merits under the playing rules shall forever be disqualified..." Hal was not about to taking this lying down. For starter's, this was a substantial amount of salary he would lose with the suspension. And so, a bizarre trial took place on January 30, 1919 at NL President John Heydler's office in New York, Chase arriving with three lawyers, a clerk and a stenographer. Cincinnati had sent no one, with Mathewson serving in France with the US Army and a key witness, pitcher Pol Perritt, at home in Louisiana. Two Reds players testified against Chase, one of whom, Greasy Neale, was alleged by Hal to be the mastermind of a clique out to get him. A key witness to testify against Hal, John McGraw, ended up swerving everyone by testifying to Hal's "good character" and alleging that Cincinnati was wasting everyone's time with these baseless charges. Ultimately, Chase was acquitted.

Despite all of this smoke as well as new accusations by Lee Magee, that Hal had bribed him to lose games in '18, and Jimmy Ring, a pitcher on the Giants no less, that he had been bribed $50 to throw a game in '18, McGraw signed Hal to play for his Giants in 1919. Hal, now cut loose in a gambling mecca, organized a group with teammates Heinie Zimmerman and Jean Dubuc to see who else would like in on some gambling action. McGraw, no doubt stunned that a man of such good character (in his opinion) would be up to no good, suspended him for allegedly throwing games during the season. Heydler, meanwhile, had observed enough during the trial to continue sleuthing. After obtaining a signed affidavit from a Boston gambler that Chase was connected to and a $500 check given to Chase for laying down a game, he was quietly banned for life during, ironically, the crooked 1919 World Series, which Rube Benton alleged he won at least $40,000 betting on. Hal was banned from Pacific Coast League parks in 1920 for trying to bribe an umpire, then attempted to bribe a PCL pitcher during a game in the Mission League that year. He was officially banned from MLB for life in 1921 by Judge Kenesaw Mountain Landis.

Life Before and After Major League Baseball[edit]

"I'd give anything if I could start in all over again... I was all wrong, at least in most things, and my best proof is that I am flat on my back, without a dime." - Hal Chase, before his death, to The Sporting News

Not a whole lot is known about Chase's upbringing. He had been born in Los Gatos, California, in what is now Silicon Valley. His father ran a sawmill, Hal spurning the family trade for athletics. He played college ball at Santa Clara University in San Jose (in spite of having dropped out of high school in 10th grade) as an extremely quick left-handed second baseman, and also played semipro ball and other minor league ball in California.

Hal played south of the border beginning in 1923. In 1925, he negotiated to be part of the formation of a new league in Mexico, where he had a café. Ban Johnson knew the president of Mexico, and had Chase deported back to the USA. For a time later that year, he played on an outlaw team in Arizona with Black Sox Buck Weaver, Chick Gandil and Lefty Williams. Chase sold cars in California and Arizona, tended bar, and drank a lot. For a while he mined gold and he ran a pool hall. He apparently was mostly a drifter, living with his wife in tourist camps. He played in a softball game in 1939, apparently his last baseball game.

Improbably, despite the lifetime ban, Hal received strong support on the first two Hall of Fame ballots, outpacing 32 future members of the Hall with 9% of ballots in 1937. The following year, he was dropped from the ballot.

He was interviewed many times from the end of his career until his death in 1947 at the age of 64, Casey Stengel and Lefty O'Doul attending his funeral. He was often vilified in articles, and yet he was usually also remembered as "The Prince".

Sources include The New Historical Baseball Abstract by Bill James