Magee was 22 years old when he broke into the big leagues on July 4, 1911, with the St. Louis Cardinals. A notoriously bad baserunner, Magee cost his team about 15 runs and two games (opinion?) in 1912 with poor base running. In a bizarre twist, on July 17, 1913, he and teammate Ted Cather were ejected from a game for fighting each other. He led the National League in Sacrifice Hits in 1914 with 35. He played for St. Louis from 1911 to 1914, but he did not respect the reserve rule and signed to manage the Brooklyn Tip-Tops of the Federal League on January 2, 1915. The Cardinals tried to prevent Magee from playing for Brooklyn, but - like most such suits - it would fail. He played for the Tip-Tops in 1915 where he batted a career-high .323 as player-manager. It was his best year in the majors; he had 146 hits, 87 runs, 19 doubles, 10 triples, 4 home runs, 49 RBI and 34 stolen bases for a batting line of .323/.356/.436 in 121 games. This was Magee's only shot at managing in the big leagues but he could get the club no higher than seventh place before he was fired. Then, on January 14, 1916, he was declared Federal League property under the Peace Pact and Bulletin Number 3. 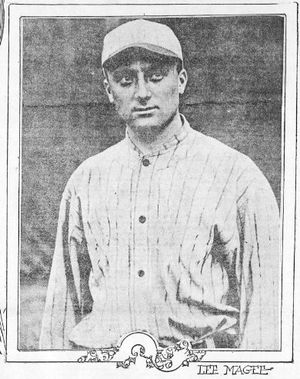 He was purchased by the New York Yankees for $22,500 and played for them in 1916 and 1917. On June 28, 1916, Magee collected a record-tying four assists in the outfield. The next day, he was caught stealing three times by the Philadelphia Athletics; not until Rickey Henderson in 1982 would another American League runner be cut down thrice in a game. On July 15, 1917, he was traded by the Yankees to the St. Louis Browns for Armando Marsans and finished the 1917 season with the Browns. On March 18, 1918, he was part of a 3-team trade which sent him to the Cincinnati Reds. As part of that trade, the Yankees sent Tim Hendryx to the Browns and the Reds sent a player to be named later to the Yankees. On April 25, 1918, Cincinnati sent Tommy Clarke to New York to complete the trade. Magee played for the Cincinnati Reds in 1918, but kept on moving, as on April 18, 1919 he was purchased by the Brooklyn Robins from the Reds as Larry Kopf returned to the Reds. He started the 1919 season with the Robins, but on June 2, 1919 he was again traded, this time to the Chicago Cubs for Pete Kilduff. He finished the 1919 season with the Cubs, with whom he played his final MLB game on September 28, 1919 at age 30.

Career Grinds to a Halt[edit]

On February 10, 1920, Magee, "wanting to make a clean breast of things," admitted to National League Prexy John Heydler and Cubs head William Veeck that he tried to "toss" a game with the Boston Braves when he was with the Reds, but that the Reds won in the 13th. Heydler will later testify on June 8th that Magee told him he became suspicious that Hal Chase had double-crossed him and so he stopped payment on the check.

On February 20, 1920, the Cubs gave Magee his unconditional release; he then sued the Cubs for his salary of $4,500, charging that his livelihood as a ball player had been destroyed through the sudden cancellation of his contract. The Cubs asked for a dismissal of the suit, saying that "previous to the making of the contract, the plaintiff was guilty of betting against the team of which he was a member, and sought to win bets by intentional bad playing to defeat said team."

On June 9, 1920, Magee lost his suit against the Cubs. He had charged that he was released without just cause the previous February. While on the witness stand, Magee admitted to having bet on a ball game between Boston and Cincinnati on July 25, 1918, while a member of the Reds. Magee was banned.

He became the proprietor of the Commerce Coal Company in Columbus, OH. He died at age 76 on March 14, 1966 in Columbus and is buried at St. Joseph Cemetery in Lockbourne, OH.

Magee's case was the warmup act for the Black Sox Scandal. A second baseman of some ability on both sides of the ball, he was anything but deft in trying to be one of the World War I era's numerous "players for sale". Between his brain and his mouth, he not only got himself thrown out of baseball, but also provided a final nail in the coffin of Hal Chase.

In 1918, Magee and Chase, then teammates with the Reds, approached a Boston gambler with a scheme for throwing the first game of a July doubleheader against the Boston Braves. Each player put up a $500 check, accepting a promise of one-third of the gambler's winnings when Cincinnati lost. But despite Magee's own efforts in the contest (two crucial errors and dawdling on the basepaths), Cincinnati won, 4-2, with the infielder himself forced to score the final run after reaching base on a bad-hop single.

To make matters worse, he then stopped payment on his check. None of this did anything for his relationship with Chase, on the one hand, or with teammates suspicious of his behavior, on the other, and it didn't come as much of a surprise when he was packed off to Brooklyn in 1919. But when Brooklyn visited Boston in June, the aggrieved gambler had Magee served with papers for non-payment of a debt. This prompted the Dodgers to unload him on the Cubs and National League President John Heydler to start sniffing around into the gambler's charges.

Heydler needn't have bothered because it was Magee himself who, in January 1920, confessed to Cubs owner William Veeck that he had been involved with Chase in the Boston shenanigans, insisting, however, that his bet to the gambler had been on the Reds, not against them. When Veeck responded by cutting him from the Cubs, Magee went to court to get his salary owed him under his contract with Chicago.

Thanks to a parade of league officals, newspapermen and former teammates who showed up as witnesses for the Cubs, he didn't have a chance. More to the point, the June 1920 trial emphasized the role played by Chase in everything, and offered final justification for the unofficial blacklisting of the first baseman. It was three months after the Magee trial that the grand jury began hearing testimony about the 1919 World Series.