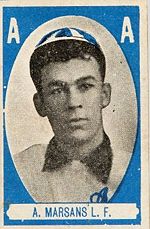 When the Cincinnati Reds invited Rafael Almeida to a tryout in 1911, Armando Marsans accompanied him to act as his interpreter. Marsans ended up trying out as well; he went on to play eight seasons in major league baseball, during the Deadball Era, accumulating 2,273 at-bats. In 1912, he was in the top ten in batting average in the National League. A centerfielder, he was a teammate of Harvard Eddie Grant in Cincinnati and George Sisler with the St. Louis Browns. He was the first Cuban-born player to get 500 at-bats in the big leagues, followed shortly thereafter by Dolf Luque and Mike Gonzalez.

Baseball Magazine in September 1914 published an article entitled "The Famous Marsans Case", calling his jumping to the Federal League "one of the most important of the test cases in baseball law".

The same publication in July 1918 referred to him as "frail in build" and "a real speed merchant". It indicated that Marsans started in the U.S. in 1907 with New London.

He was the first Cuban to manage in Organized Baseball, leading the Elmira Colonels in 1924. He also managed the 1956 Havana Cubans in the Florida International League.

He is the all-time stolen base leader in the history of the Cuban Winter League, with 135, 23 more than Cristobal Torriente.

Armando Marsans was among the first group of players inducted into the Cuban Baseball Hall of Fame in 1939.