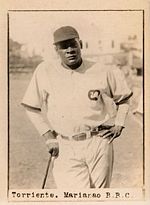 Cristóbal Torriente is considered the greatest Cuban position player of the first half of the 20th Century and is arguably the greatest Cuban player ever. Not only was he a five-tool player, he also pitched on occasion and drew many walks. Due to his kinky hair, he played in the Negro Leagues despite being relatively light-skinned, where he spent a successful 12-year stint with the Cuban Stars. He also played for the Chicago American Giants, Kansas City Monarchs, and Detroit Stars. C.I. Taylor once said, "If I should see Torriente walking up the other side of the street, I would say 'There walks a ballclub.'"

A left-handed hitter and centerfielder, he was said to be an excellent defensive player. He also played right field, 2nd base, third base, and pitched. Statistics are limited for the first half of his career due to the lack of an organized Negro League at that point.

Torriente hit .337 in the 1912-13 Cuban Winter League, third-best, and went to the US that summer to play for the touring Cuban club. He hit .383, the best of any player among top western black teams (edging Hall-of-Famer Pete Hill by one point), he tied Pelayo Chacon for the lead with six doubles and homered three times, the most. He led the Cuban Winter League in batting that winter with a .387 clip.

He was second among black western teams in average in 1914, trailing only George Shively and was among the leaders in doubles (15, third-best) and homers (3, 4th-best). He was 4-3 on the mound. He hit .403 that winter, again third in the CWL, and led the Cuban winter league in steals, triples and homers (a whopping two in the deadball era). In 1915, the 21-year-old superstar hit .317 for the Cuban Stars, placing him third in the west and fifth with five doubles. He was again 4-3 on the hill. The next season, Cristobal topped .350 and was second to Pop Lloyd in the west. He was third in steals (7) and tied Chacon for the doubles lead (9). He hit .500 for the Cuban club in 1917 but did not play enough to count among the top players in average.

In 1918, the outfielder hit .318 (fifth in the west) and went 2-2 on the mound. In '19, Torriente moved to the Chicago American Giants early in the year. He tied for thw estern lead with four doubles, hit around .280 and went 5-1. That winter, the Pittsburgh Pirates came to Cuba and Cristobal hit .310 against them. He batted only .273 as one of the weaker members of a Cuban team that beat an All-Star US team later that winter. He hit .296 in the 1919-20 Cuban winter season, also an off-time for him.

In 1920, Torriente returned to form by hitting .361 for Chicago, third in the new Negro National League and tying for fourth with six triples. Recent research posts even more impressive numbers - a .432/~.483/.661 batting line. That year, Babe Ruth matched up with Torriente, who hit a double that "almost tore my leg off" as per 3B Frankie Frisch. Cristobal homered three times against George Kelly, not normally a pitcher. The Los Angeles Times gave him the nickname "The Cuban Babe Ruth." He hit .350 in the winterball season, second-best, in a reduced season.

In 1926, after an off-year and due to problems with a love of Chicago's nightlife, he was dealt to the Kansas City Monarchs. He quit the team for a spell due to a dispute with the owner over a lost diamond ring (Torriente loved jewelry). He still had a fine year - .371 (tied for 4th in average with Willie Wells) and 18 doubles (5th) according to Holway and .354/~.425/.495 according to the recent data compiled by the Hall of Fame's researchers.

Cristobal declined into alcoholism and poverty after that and died in 1938 of tuberculosis. His body was returned to Cuba for burial. He was one of the initial selections for the Cuban Baseball Hall of Fame in 1939 but did not reach enshrinmenet in the Hall of Fame until the 2006 Special Committee on the Negro Leagues Election selected him.