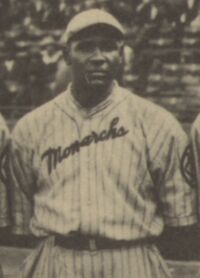 Heavy Johnson was a big player who put up some big numbers in a relatively short career in the Negro Leagues, hitting .350 overall and winning a Triple Crown. He was in the Twenty-Fifth Infantry Wreckers, and all-black military unit ("buffalo soldiers"), from at least 1915 through 1922, spending many of his prime years in the military. He was honorably discharged in March of 1919 but renlisted the next January. He was the catcher for the unit's famed baseball outfit which produced other Negro League stars such as Dobie Moore. He was stationed in Hawaii from 1915-1919.

According to research by Gary Ashwill, an April 20, 1895 birthday appears to be correct for Johnson. The family then apparently moved to Youngstown, OH. In 1913, Johnson apparently added three years to his age to enlist in the Army and kept this false birthdate the rest of his life. Additionally, Ashwill gives an October 9, 1960 deathdate as a possibility.

In 1920, when the army was having athletic competitions to prepare for the Olympic trials, Johnson's unit was stationed in St. Louis, MO and he played in one of the Twenty-Fifth Infantry Wreckers' games in the city at that time. The Chicago Defender reported that the St. Louis Giants signed a Johnson, "a catcher who is said to be the peer of them all", who appeared for two games in early July, batting fifth once and sixth once, going 2 for 8 with a triple, then vanishing from the roster. Gary Ashwill posits that this could well have been Heavy Johnson.

Johnson joined the Kansas City Monarchs in 1922, hitting .389/.438/.644 overall and .405 in Negro National League competition, winning a batting title as a rookie. He began the transition that year from catcher to right field.

Johnson spent part of that winter with what was arguably the greatest Cuban Winter League team ever, the 1923-24 Santa Clara club. He hit .345 and slugged .509 playing part-time at first base, leaving for the U.S. before the season ended.

While not as dominant in 1924, Johnson hit .374 (third in the NNL) with 16 doubles (fifth) and 11 triples (third). In the first Negro World Series, Johnson hit .296 and delivered the winning double in the finale. He also had a fine catch-and-throw double play from the wall to get Tank Carr at home during that Series.

Johnson moved to the Baltimore Black Sox in 1925, hitting fifth after Jud Wilson and John Beckwith. He hit .352 and followed with .364 the next year, when his 8 homers tied for fifth in the Eastern Colored League. Moving to the Harrisburg Giants in 1927, Johnson batted .336.

Oscar hit .279 for the 1928 Cleveland Tigers, then moved on to the Memphis Red Sox as a part-timer for the rest of his career.