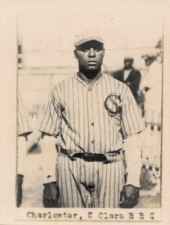 Inducted into the Hall of Fame in 1976

"Charleston could hit that ball a mile. He didn't have a weakness." - Dizzy Dean

Oscar Charleston is considered by many experts to have been the greatest ballplayer of the Negro Leagues. Bill James ranked him as the fourth-greatest player of all time in his New Bill James Historical Baseball Abstract. He was primarily a center fielder in the early part of his career, switching to left field and then to first base as he aged. He is among the top five Negro Leaguers in batting average and home runs, as well as the all-time leader in stolen bases.

Charleston was later described as having had a terrible temper and being in numreous fights with opposing players, umpires, police, and even armed soldiers, but this is greatly exaggerated. As a 19-year-old with the Indianapolis ABCs, however, he did get into a famous fight on October 17, 1915, when he decked a white umpire with a punch while rushing to the defence of teammate Bingo DeMoss, who had started the fight; the incident nearly caused a race riot (the ABCs were playing a team of while "All-Stars") and both DeMoss and Charleston were arrested and eventually found guilty and fined relatively small amounts. According to legend, Charleston once ripped the hood off a Klansman who had confronted him. Despite (or perhaps because of) his aggressiveness, he was one of the most popular figures in the Negro Leagues throughout his playing and managing career.

His brother Bennie Charleston also played in the Negro Leagues, albeit very briefly.