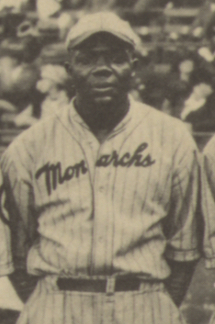 Dobie Moore was a Negro League shortstop and right-handed hitter who played his entire Negro Leagues career with the Kansas City Monarchs. His career was ended abruptly by an off-field injury in the middle of his seventh season.

Born in 1896 in Georgia, Moore served in the Army and played third base for the Twenty-Fifth Infantry Wreckers from 1916 to 1920, from about age 20 to 24, along with Bullet Rogan, Heavy Johnson, Lem Hawkins, Bob Fagan, and possibly other future Negro Leaguers. He went from the Wreckers directly to the Monarchs in mid-season 1920, where he was the league's top shortstop until his career ended. At 5'11" and 230 pounds, he was considered one of the best-fielding short stops in the Negro Leagues, and hit for a .346 lifetime batting average with better than average power and speed.

Nicknamed "the Black Cat", Moore helped the Monarchs to three league titles (1923, 1924, and 1925), and one Colored World Series title in 1924. He batted .300 in the 1924 Series and .364 in a losing cause in the 1925 Series. The loss of his services in 1926 following the leg injury was blamed by Negro sports writers for the team's inability to repeat in 1926. He had the highest lifetime batting average (.385) in the California Winter League, which was the first integrated league in the United States, and starred in the 1923-24 Cuban Winter League in his only season there.

End of career, aftermath, and analysis

Moore's Negro Leagues playing career ended on the night of May 18 1926 when he was shot in the lower leg by a female neighbor after a game and suffered a compound fracture to his left tibia after either jumping from a terrace or balcony to escape further shots. Contemporary news stories said he was shot when mistaken for a burglar, though later stories surfaced that he was shot during a lovers' quarrel. The leg healed badly, and he was unable to resume his Negro Leagues career. He later lived in Detroit and played semi-pro ball there as a stiff-legged first baseman into the late 1930s.

Moore died in Detroit in 1947, aged 51. The last known news account of him was in 1943, when his photograph appeared in the Chicago Defender; his death went unreported in the African-American press, though he periodically received passing mention in the 1940s and '50s, apparently without word as to whether he was still living.

Moore was considered by many black sportswriters as the best shortstop of his day, playing most of his career in a time when John Henry Lloyd was past his prime, Willie Wells had not yet fully established his reputation, and Moore was considered a superior hitter to Dick Lundy. However, his career is difficult to assess, primarily due to its short length. Moore played full time from 1916 to 1919 (with a partial season in 1920) with the Twenty-Fifth Infantry Wreckers before the founding of the NNL, mostly playing third base for the Army team, and received much less news coverage with the Hawaii-based Army team than he did playing in the organized Negro Leagues. He was 30 and in his prime at the time of his career-ending injury. Nevertheless, he is considered by some analysts to have been one of the five best shortstops (along with Lloyd, Wells, Lundy, and Home Run Johnson) in Negro Leagues history.

He was nominated and considered for the Hall of Fame in 2006, but fell short of the needed 75% affirmative vote. Most voters on the committee felt that their brief was to consider only a player's time in the Negro Leagues, and his time with the Wreckers was ignored.