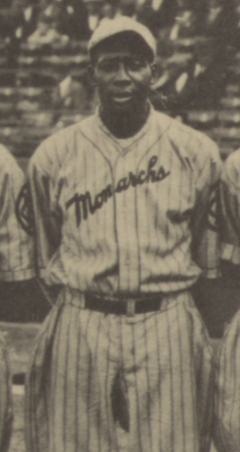 Bullet Rogan played for the Negro League Kansas City Monarchs from 1920 to 1938. He was one of the winningest pitchers in Negro Leagues history, as well as a top hitter, frequently playing an outfield position when not pitching.

Rogan started as a catcher with an amateur team in Kansas City, Kansas, and then enlisted in the United States Army about 1914, and was recruited about 1915 to play for the all-black Twenty-Fifth Infantry Wreckers club at Schofield Barracks until 1918, pitching and playing all positions. While on leave in March and April 1917, Rogan pitched a game for the Los Angeles White Sox, an all-black team in the California Winter League, and then pitched some games for the All-Nations Team in his hometown. The Twenty-Fifth Infantry transferred to Ft. Stephen Little near Nogales, Arizona in 1919, and Rogan got his discharge in June 1920, at which time he joined the Monarchs. In his professional career he played every position except catcher, mainly concentrating on his pitching. Following the death of José Méndez, Rogan became the Monarchs' manager in the late 1920s, retiring from that position in the late thirties. Well into the late 1940s, he umpired in the Negro American League, primarily at Monarchs home games.

Rogan is thought to have been one of the first pitchers to work from a no-windup position.

Rogan also was a long-time California Winter League star. His 52 complete games is the CWL record and he ranks second in innings pitched and strikeouts (516 and 351 respectively, trailing only Satchel Paige in both categories). He is 5th with 5 shutouts and third with 42 wins (behind Paige and Chet Brewer).

Satchel Paige said this about Rogan in the book Blackball Stars: "Joe Rogan was one of the world's greatest pitchers. ...He was a chunky little guy, but he could throw hard. He could throw hard as Smokey Joe Williams-yeah."