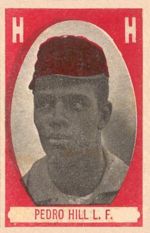 A five-tool player, Pete Hill was considered the greatest African-American outfielder before Oscar Charleston. Unfortunately he played most of his career in the pre-league era when games between top teams were limited so statistics are not as complete as for later players. He began his career with the local Pittsburgh Keystones in 1899, then joined the Cuban X-Giants in 1901. In 1903 Hill joined the Philadelphia Giants and began playing regularly in 1904 for the top team of the era in black baseball. In 1905 he hit .583 in the limited time against other top-flight black teams that year, the nhit .351 in a visit to Cuba. The next year he had the top average in the east at .452 and went 3 for 7 against the Philadelphia A's, who used Rube Waddell, Eddie Plank, Andy Coakley and Jim Holmes in the series. Hill hit just .272 in Cuba that year.

In 1907 Pete followed teammate Rube Foster west to the Leland Giants. In Cuba that year he had the top batting average, .349. The next year he played for the Leland Giants and the Brooklyn Royal Giants. He was just 4 of 20 in a series against his old Philadelphia mates but was 3 for 8 against the Cincinnati Reds. Back with Leland full-time in 1909, he slipped to .253, was 2 for 16 against the Philadelphia Giants and 2 for 11 against the Chicago Cubs. He was 7 for 20 against a white All-Star team featuring Addie Joss, Three-Finger Brown, Howie Camnitz, Nap Rucker, George Mullin and Ed Willett on the mound.

In 1910 Hill hit .457 for the Leland Giants, the top mark among black players on western teams, but only batted .250 in a series in Cuba. He hit .303 against a white major-league pitchers (Plank, Mullin, Willett, Jack Coombs, Ed Summers and Chief Bender) and led the Cuban Winter League in the second half with a .365 average.

The Leland Giants were renamed the Chicago American Giants in 1911 and Hill hit .244. In the Cuban Winter League that season he hit .284. In 1912 Pete hit .406 for Chicago, third in the west. In 1913 his .382 average was second to Cristobal Torriente and his 5 doubles were one off the lead as he was the top offensive player on the top team in the west. Pete slipped all the way to .228 for Chicago in 1914 (bearing in mind that it was the Deadball Era and that Chicago played in a pitcher-friendly park - 6 of the 8 starters hit under .240); he tied for fourth in doubles (8) and was third in steals (8).

Hill played in 1922 for Chappie Johnson's independent Philadelphia Royal Stars, but returned to the NNL at Foster's request, as player-manager of the Milwaukee Bears in 1923, hitting .296/.374/.346 as a part-timer. He then was a player-manager with the Baltimore Black Sox from 1924-1925 before retiring from baseball.

He later worked for Ford Motor Company in Detroit, and died in Buffalo, NY in 1951. A reader poll by the Pittsburgh Courier picked him in 1952 as the fourth-greatest outfielder in the history of the Negro Leagues, behind Charleston, Torriente and Monte Irvin (who beat Hill out by one vote for the first team). In 2006 he was posthumously elected into the Hall of Fame by the Special Committee on the Negro Leagues.

Researcher Phil Dixon wrote that "the aesthetics of Hill’s left-handed hitting and throwing made it appear as though he had copied them from a text book. Because he was virtually clandestine, pitchers seldom recognized him until it was too late. Hill, throughout the season of 1905, pounded baseballs with a consistency that literally made pitchers scratch their heads in amazement. He was nearly impossible to keep off base."

Dixon, referring to Hill's performance against all levels of competition in 1905, said that "Hill collected hits as if they came in bushels. His 1905 totals included three five-hit games, three games of four hits and an amazing twenty games in which he had three hits - a total of 87 hits in just 26 games. According to Sol White the Philadelphia Giants played 158 that season, putting Hill's total hits well over 200. This however was only a fraction of his grand productivity for 1905 as he ranked among team leaders in stolen bases, doubles and home runs."

Pete Hill died in Buffalo, New York on December 19, 1951. His body was shipped to Chicago, Illinois, and he was buried on December 28, 1951 in the Holy Sepulchre Cemetery in Alsip, Illinois. His unmarked grave was located by SABR member Jeremy Krock, and plans are being made to purchase a gravestone for Hill.

When Hill was formally inducted in 2006, biographical information on his plaque was incorrect. The plaque was recast and rededicated on October 12, 2010 (on the 128th anniversary of his birth) with his first name, birth date, birth place, and death date all corrected.

Please note that Hill's statistics presented are vs. top-level Negro teams only, and that during the pre-league years (1904-1919) there were fewer such games.