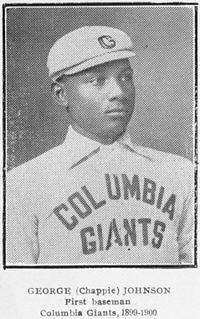 Chappie Johnson was a catcher and manager in the Negro Leagues in the early part of the 20th Century.

Johnson debuted with the Page Fence Giants in 1896, as a starting outfielder. He remained with the club for two more seasons, starting at catcher in 1898. He then was the starting first baseman for the Chicago Columbia Giants in 1899-1900. He was the catcher for the Chicago Union Giants in 1901-1902. He was the catcher for the Algona Brownies in 1903, then split 1904 between Algona and the Philadelphia Giants (hitting .599 in limited action against other top black clubs). He played for a team in Minnesota in 1905 and also had a stint with the Brooklyn Royal Giants. He backed up Pete Booker with the Philadelphia club in 1906. That year, he was head trainer for the Boston Braves in spring training, a rare example of a Negro Leaguer assisting a major league team. Johnson would later assist the St. Paul Saints during spring training from 1909-1912.

In the winter of 1907, Johnson was a catcher for Habana in the Cuban Winter League, hitting .82/.292/.216. He did tie for third in the circuit with 15 walks; at the heart of a low-offense era, his OPS+ was 87, not bad for a catcher. From 1907-1909, Johnson is listed as manager of the St. Paul Gophers by James Riley, but John Holway lists him as the starting catcher for Brooklyn in 1907 and the starting first baseman for the Leland Giants in 1909 (with a .267 average and 1-0 record as a pitcher). Chappie hit .111 as the catcher for the Chicago Giants in 1910. With the St. Louis Giants in 1911, he was hitless against other top black teams (again, in limited action, as top-flight teams rarely played one another in the pre-Negro National League era). In 1912, the Ohio native hit .226 for St. Louis.

Johnson became player-manager with the Mohawk Giants of 1913-1914. He hit .111 as their starting catcher in '14, his last regular action as a player. He was co-owner and manager of the 1917 Dayton, OH club. He was with the Atlantic City Bacharach Giants in 1919 and wrapped up his playing career completely with the minor Norfolk Stars in 1921.

Chappie was manager of Chappie Johnson's Stars from 1925-1927 and guided minor clubs in Norfolk and Saratoga as well. He helped develop Dick Seay, Ted Page, Scrip Lee and Nip Winters on their way up to the top black teams of the era.