Note: This page links to Hall of Famer and former Negro Leaguer Andrew "Rube" Foster. For the pitcher named George "Rube" Foster who played from 1913 to 1917, click here. 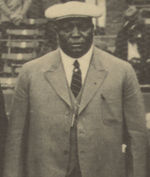 The half-brother of Bill Foster, Rube Foster was a pitcher, manager, and executive in the Negro Leagues. He was one of the founders of the Negro National League and won the league's first-three pennants as manager of the Chicago American Giants. Quote: "(Foster is) the most finished product I've ever seen in the pitcher's box." Frank Chance.

He played for the Otsego Independents, Otsego, Michigan - a 'white' semi-pro team in the Michigan State League, in 1902 before signing with the Cuban X-Giants late in that season.