Inducted into Hall of Fame in 1978 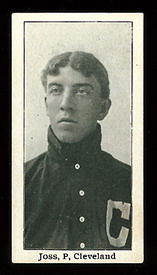 Addie Joss made his major league debut in 1902 and pitched his entire career with the Cleveland Naps (also known as the Bronchos during his rookie season and later called the Indians after his death). He won at least 20 games each season from 1905 to 1908. In 1908, Joss went 24-11 with a 1.16 ERA and on October 2nd of that year pitched a perfect game against the Chicago White Sox.

After all these years, Joss is still the pitcher with the best WHIP of all time (minimum 100 decisions); Clayton Kershaw has a chance of catching him as of 2019. 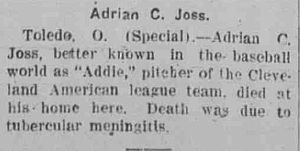 Small obituary for the ballplayer

Joss later developed an elbow injury that caused him to miss the second half of the 1910 season. The next spring, he contracted meningitis and died at the age of 30. He was ill only a few days before dying.

Joss was elected to the Hall of Fame despite not meeting the requirement of ten years of service. He was elected after many years of campaigning by sportswriters Jerry Nason, Joe Reichler, and Fred Lieb.

Joss's New York Times obituary indicates that he started in semi-pro ball in 1898 and pitched for Toledo before coming to the majors.

Addie didn't get into the Hall of Fame until many decades after his career had ended, primarily because he had pitched only nine seasons. One can also ask why his WAR7 is not higher. However, that is explained by the fact that most of his managers (especially Bill Armour) chose not to over-use him. He was never in the top ten in the league in innings pitched until he got so very successful with the Naps in 1907 and 1908 that his manager of the time, Nap Lajoie, allowed him to pitch enough to get into the top ten in the league in innings in those two years. Nevertheless, Joss was clearly extremely good when he did pitch over the course of his career, as is shown by a career ERA+ of 143 (normalized to the league environment), which is 12th of all time. A comparison might be made to his contemporary Joe McGinnity, who pitched large amounts of innings without as high an ERA+, and accumulated a higher WAR7 simply because of frequent use. Addie's won-loss record is also similar to that of Ron Guidry, not in the Hall of Fame, but Joss's ERA+ is much better.

"When you talk about pitchers in Cleveland, there will be three names that come to mind immediately: Cy Young, Bob Feller, and Addie Joss." - Lee Allen, Baseball Hall of Fame historian