"The best soap opera was the [Yankees] team we had here in the '70s. . . [People] couldn't wait to pick up the papers the next morning to see what was going on." - Ron Guidry

1978 American League Cy Young Award winner Ron Guidry spent his entire playing career with the New York Yankees and was named their pitching coach starting in 2006. His 18 strikeouts in a game on June 17, 1978 against the California Angels remains a Yankees team record. His 25-3 record that year is the highest winning percentage in history for a starting pitcher (Roy Face was 18-1 as a reliever for the Pittsburgh Pirates in 1961).

His career record was 170-91, and he also won 3 World Series games. He was a four-time All-Star, and was also in the top 5 in balloting for the Cy Young Award three times besides his winning the award in 1978. Guidry led the league twice in ERA, in back-to-back seasons in 1978 and 1979, and won the Roberto Clemente Award in 1984. He led the American League twice in wins and twice in winning percentage. Two of his ten most similar pitchers, according to the similarity scores method, are in the Hall of Fame, one of them being Sandy Koufax.

In Hall of Fame voting by the BBWAA, his highest percentage was 9% in 2000. His candidacy for the Hall suffers from the fact that his 170 victories are fewer than almost all of the starting pitchers elected, and some of the pitchers with fewer victories than Guidry are in the Hall for special reasons. For example, John Ward won 164 games but was also a position player and manager and baseball executive. Addie Joss, who won 160 games, died while his career was in progress. Dizzy Dean, with 150 victories, had a thirty-win season and became a beloved sportscaster after his playing days.

On the other hand, Guidry played for very high-visibility teams, and his winning percentage is higher than the vast majority of Hall of Fame starting pitchers. It is very similar to that of Sandy Koufax, in fact. Four of the six most similar players (before the beginning of the 2011 season) are active players. The retired pitcher most similar to Guidry is another Yankees pitcher, Ed Lopat, but Lopat's winning percentage was not nearly as high as Guidry's. Bret Saberhagen, the retired pitcher second most similar to Guidry, is not in the Hall of Fame. 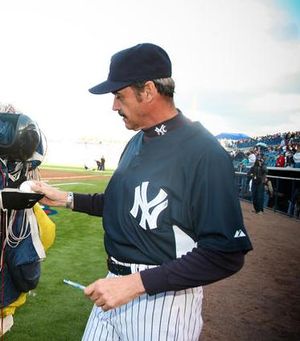 Guidry as a Yankees pitching coach

Since his playing days ended, Guidry served as the pitching coach of the Yankees for the 2006 and 2007 seasons.