Note: This page is for 1970s-1980s pitcher and General Manager Mike Flanagan; for others with a similar name click here. 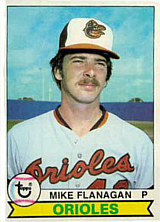 "He was a good pitcher, an even better teammate. His locker was only a couple down from mine at Memorial Stadium. I played with him for 10 years. He's a good man. He's one of the best pitchers the Orioles ever had." - Ken Singleton

“Take two worms and call me in the morning.” to the Orioles’ mascot, as he fell off the roof of the team’s dugout 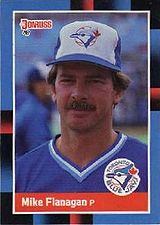 Mike Flanagan won 167 games over eighteen seasons in the majors, mostly spent with the Baltimore Orioles, and was the winner of the 1979 American League Cy Young Award. Later, he was the O's pitching coach and general manager, as well as a broadcaster for the club.

The son of minor league pitcher Ed Flanagan Jr., Mike was selected by the Houston Astros in the 15th round of the 1971 amateur draft but did not sign. Instead, he attended the University of Massachusetts, where he pitched and played outfield. In 1973, he went 9-1 for the Minutemen with a 1.52 ERA and 91 strikeouts. Overall, in two years at Massachusetts, he hit .320 with 6 home runs, while going 12-1 on the mound with a school-record ERA of 1.19.

While attending UMass, he was on the freshman basketball team with future college and NBA coach Rick Pitino. A game against upperclassmen, in which he had a shot blocked by the legendary "Dr. J" Julius Erving (a junior at the time), convinced Mike his future was on the diamond, not the hardwood.

Flanagan was drafted by the Orioles in the seventh round of the 1973 amateur draft. He started his pro career that summer with the Miami Orioles of the Florida State League, going 4-1 with a 2.21 ERA in 11 games. He played with Miami and the Asheville Orioles in 1974, going 6-6 with a 2.10 ERA and 6 complete games with Miami, then posting a 6-4 record with a 1.82 ERA and 7 complete games for Asheville. In 1975, he went 13-4 with a 2.50 ERA and 10 complete games in 27 outings for the Rochester Red Wings before earning a late-season promotion to the majors. He made his big league debut on September 5th, coming out of the bullpen to face the New York Yankees, and started his first game on September 28th against the Yankees, allowing 2 earned runs over 8 innings and taking the loss. Overall, with Baltimore, he went 0-1 with a 2.79 ERA in two outings.

Glory Days with the Orioles[edit]

In 1976, Flanagan went 6-1 with a 2.12 ERA and 6 complete games in 7 starts for Rochester and was soon called up to the majors for good. Splitting time between starting and relieving, he posted a 3-5 record and 4.13 ERA in 20 appearances. In his first full major league campaign the following year, he joined the O's rotation and went 15-10 with a 3.64 ERA and 15 complete games. In 1978, as part of a staff that included Jim Palmer, Dennis Martinez, and Scott McGregor, Flanagan threw 17 complete games and won 19 while being named an All-Star for the only time in his career.

Flanagan had his best year in 1979, finishing 23-9 with a 3.09 ERA and a career-high 190 strikeouts. He led the American League in wins, tied for the circuit lead with 5 shutouts, and won the Cy Young Award. He started (and won) the first game of that fall's World Series, but Baltimore fell to the Pittsburgh Pirates in seven games. The following year, his record dropped to 16-13 while his ERA went up more than a run to 4.12.

Despite missing a month of the 1981 season with an injury, Flanagan still went 9-6 during the strike-shortened season, and won 15 games the next year. Flanagan's arbitration case in the winter of 1982 was thrown out when the two sides last minute filings moved past each other, and the club's proposal of $500,000 came in higher than Flanagan's requested $485,000. The higher number was awarded. Flanagan began 1983 by winning his first 6 decisions but suffered a knee injury in May. After missing nearly three months, he came back and ended the year with a 12-4 record and 3.30 ERA. The Orioles again reached the World Series that fall, and Flanagan started Game 3 against the Philadelphia Phillies as his club won the Series in five.

Following the retirement of Hall of Famer Jim Palmer early in 1984, Flanagan became the elder statesman of the O's rotation and went 13-13 that year. He missed more than half of the 1985 campaign after suffering an offseason injury and struggled to a 4-5 record and 5.13 ERA. He posted another losing record (7-11, 4.24 ERA) for a last-place Baltimore team in 1986. His struggles continued the following year, as he missed two months with an elbow injury and went 3-6 with a 4.94 ERA in 16 games for the Orioles before being traded to the Toronto Blue Jays in late August. 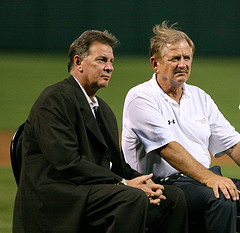 Flanagan (left) and Rick Dempsey in 2007

The Orioles invited Flanagan to spring training in 1991, and he ended up making the team in a relief role. On July 13th, he pitched the 7th inning of a combined no-hitter against the Oakland Athletics (along with Bob Milacki, Mark Williamson, and Gregg Olson). On the season's final day, he entered a game against the Detroit Tigers in the 9th inning and struck out Dave Bergman and Travis Fryman to record the last two outs at Memorial Stadium. Overall, he went 2-7 with 3 saves and a 2.38 ERA in 64 outings. He struggled mightily in 1992, posting an 8.05 ERA in 42 games in what would be his final year.

Flanagan was elected to the Orioles Hall of Fame in 1994. He served as Baltimore pitching coach under manager Phil Regan in 1995. After a stint as an Orioles announcer in 1996 and 1997, he was again the club's pitching coach on skipper Ray Miller's staff in 1998. He then returned to the broadcast booth for the next four years.

After the 2002 campaign, he was named co-General Manager of the team along with Jim Beattie. The Orioles were going through a difficult period at the time and online journalists nicknamed the tandem "Beatagan". Beattie was fired after the 2005 season, and Flanagan held the job alone until Andy MacPhail joined the team in 2007. He remained with the Orioles until 2008 and later spent a third go-round as one of the club's broadcasters.

Mike and his wife Kathy were the parents of one of the first "test-tube babies" to be born in the United States; their daughter Kerry Ellen was born in 1982 as a result of in-vitro fertilization, just the 8th such baby born in the country, and the first to be born naturally, not through cesarean section.

Flanagan was found dead on his property in rural Maryland on August 24, 2011. He was 59. The medical examiner ruled that he had died of a self-inflicted shotgun wound; he was having financial difficulties at the time of his death. The Orioles elected to wear a black patch reading "Flanny" on the right shoulder of their uniform for the remainder of the season in his honor.