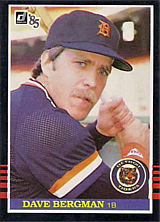 "Tonight I saw the greatest at bat in my life... Bergie fouled off seven pitches and then picked one practically off the ground and drilled it into the upper deck in right. What a battle! Bergie was up there a full seven minutes." - Sparky Anderson, after Bergman's signature home run during the Tigers championship season of 1984

An outstanding fielder and tough hitter, Dave Bergman was arguably one of the best bench players in baseball during his 17 big league seasons.

Originally selected by the Chicago Cubs in the 12th round of the 1971 amateur draft, Bergman did not sign, opting to attend Illinois State University instead. He hit .400 as a sophomore and .351 as a junior, batting .366 overall during his college career. He was then chosen by the New York Yankees in the second round of the 1974 amateur draft. He made his pro debut that summer with the Oneonta Yankees, hitting .348 with 10 home runs, and the following summer led the Eastern League with a .311 average while also hitting 11 homers for the West Haven Yankees. He earned a late season call-up to New York in 1975 but went hitless in 17 at-bats. After playing for the Syracuse Chiefs for the next two summers, he earned another cup of coffee with the Yankees in September 1977. Following the 1977 season, he was sent to the Houston Astros.

Dave got into 104 games for Houston in 1978 but spent most of 1979 back in the minors with the Triple A Charleston Charlies. In his brief major league stay that year, he hit his first big league home run off future Hall of Famer Phil Niekro. He was traded to the San Francisco Giants early in the 1981 season and moved on to the Detroit Tigers prior to the 1984 season. He saw considerable playing time at first base that year, hitting .273 with 7 home runs, as the Tigers went on to win the 1984 World Series. The biggest game of his career came on June 4th against the Toronto Blue Jays, when he hit a three-run walk-off home run off Roy Lee Jackson after fouling off nine pitches in the 10th inning; it was his first long ball as a member of the Tigers. Over the next several years, he saw most of his action coming off the bench, but he was again the team's regular first baseman in 1989, hitting .268 with 7 homers as a 36-year-old. He continued to play for Detroit through 1992.

He was diagnosed with bile duct cancer in 2012 and spent the last couple of years of his life fighting the disease, passing away at 61 in 2015.