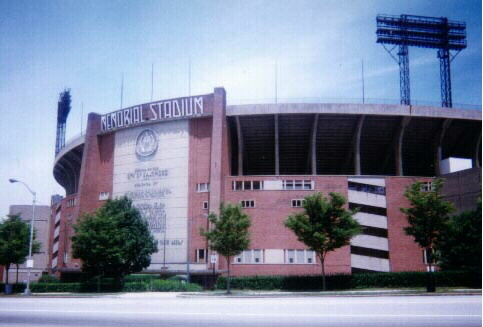 Memorial Stadium was originally known as Venable Stadium back in 1944. A sign above the entrance, dedicated in 1954, had the following inscription:

"Dedicated as a memorial to all who so valiantly fought in the world wars with eternal gratitude to those who made the supreme sacrifice to preserve equality and freedom throughout the world – time will not dim the glory of their deeds."

When that sign was put in place, there were some members of the Baltimore Orioles who cursed he park: "You just didn't have a close relationship with the fans," according to original Oriole shortstop Billy Hunter. Before the field boxes were built in 1961, there was acres and acres of foul territory. "The hitters hated it," Hunter said. "There were a lot of outs that normally would have been in the stands somewhere else."

The same could be said for the outfield: the original dimensions were 447 feet to the alleys and 450 feet to dead center (which is how many of the fly balls going out there ended up). Fences were brought in four times, to where center field stood 405 feet away from home plate in 1991. The old outfield was replaced by planted trees and shrubbery.

Frank Robinson was the only player to hit a ball completely out of the park. After the homer was hit on Mothers' Day 1966, a flag was flown from the outer edge of the stadium at the point at which the ball left that simply said, "HERE". 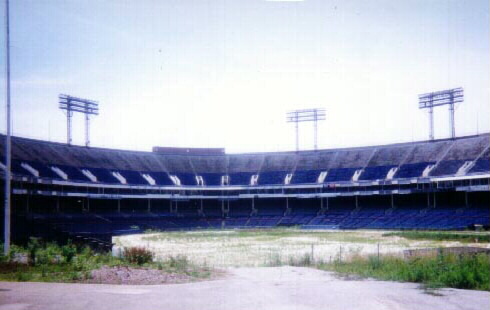 This is the only ballpark to have a single-engine plane crash into its upper grandstand – and no major damage was done. The crash happened on December 19, 1976, right after the NFL's Baltimore Colts had lost to the Pittsburgh Steelers. Amazingly, no one was hurt.

The fight to replace this stadium, built in the middle of the suburbs of Baltimore, MD, began in the mid-1970's, when discussion of a possible domed stadium in the area of Camden Yards was talked about.

Even though the park was the home of crabcakes, 17 titles for the O's, and had a hometown feel about it, most players and fans were looking forward to playing in Camden Yards' Oriole Park.

The stadium the Orioles left behind - "Thank yoooouuu" was heard for the last time at Memorial Stadium on October 6, 1991 - lasted a little bit longer as a ballpark – the Bowie Baysox played their Eastern League home games here until their new park was finished in 1994. The stadium was temporary home to the Baltimore Ravens of the NFL (formerly known as the Cleveland Browns) through 1997. The Ravens moved into their new stadium – named for a now-defunct corporation – in 1998.

Demolition began in November of 2000, and the park was finally torn down in February of 2002. Its site is slated to become a senior apartment complex and a branch of the YMCA, with retail space nearby.

The last line of the inscription on the front of the park is now part of a veterans' memorial at Camden Yards, but the entire sign isn't there: the letters spelling the park's name on that sign have been leased to Cal Ripken Jr. for a replica of the park at his baseball academy in Aberdeen, MD – for only $1 per letter.