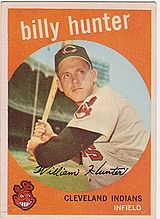 Billy Hunter played six seasons in the majors, mostly at shortstop, and later managed the Texas Rangers. He appeared in the All-Star Game as a rookie in 1953. An outstanding fielder early in his career, Hunter has one of the lowest career batting averages and on-base percentages of any former major league regular.

Hunter was signed by the Brooklyn Dodgers in 1948 after briefly attending Penn State University on a football scholarship, and played at Trois-Rivières that same year. During his time in the Dodgers organization, though, Pee Wee Reese owned shortstop, and so Hunter was eventually traded in 1952 to the St. Louis Browns.

In the winter of 1952 he played for the Santurce Crabbers, forming a double-play combination with Jim Gilliam, who would also be a major league rookie in 1953. Billy became the everyday shortstop for the sad-sack St. Louis Browns in 1953, playing every single game of their last season in St. Louis.

In 1954, he was on the team during the first season of the Baltimore Orioles. After the season he was traded to the New York Yankees in a multi-player deal involving Don Larsen and a slew of others, and Billy became the regular shortstop on the Yankees in 1955, appearing a bit more often at the position than the 38-year-old Phil Rizzuto.

For 1957 he moved to the Kansas City Athletics where he became the regular second baseman, also playing a lot of shortstop and some third base. He hit under .200, and the following year when he also hit under .200 for Kansas City and the Cleveland Indians, his major league career was over.

After his playing career ended, Billy Hunter was a scout for the Indians in 1961. He managed the Bluefield Orioles in 1962 and 1963 and was a Baltimore Orioles coach from 1964 to 1977 before becoming skipper of the Texas Rangers for a season and a half. He was also a longtime athletics director at Towson State University. Hunter coached the baseball team at Towson from 1979 to 1987.