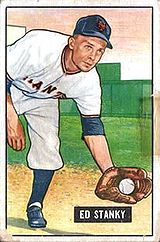 Eddie Stanky played 11 years in the majors and managed for eight years. He led the league three times in walks and once in runs scored. Primarily a second baseman, he appeared in three World Series and three All-Star Games.

Stanky as a player drew huge numbers of walks, with a peak of 148 with the Brooklyn Dodgers in 1945. He was in the top 3 in the league in walks six different times. A second baseman with good defensive range, Stanky's walks helped him get on base enough to score many runs even though he wasn't a base-stealer. He led the league in runs scored in 1945. His highest finish in the MVP voting was third in 1950 when he was with the New York Giants in the year before Willie Mays broke in.

The similarity scores method shows the most similar player to Stanky as Max Bishop, who also drew many walks. Stanky was the son-in-law of Milt Stock.

After serving as a player-manager for the St. Louis Cardinals and a Cleveland Indians coach in the 1950s, the fiery Stanky went on to manage the Chicago White Sox in the 1960s, almost winning the pennant in 1967. He later managed the 1977 Texas Rangers for only one game before quitting.

Stanky was the baseball coach at the University of South Alabama for 14 years, where he had substantial success and coached a number of future major leaguers.