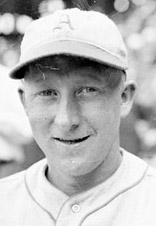 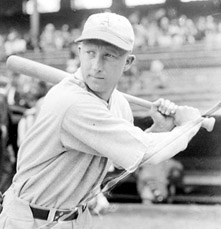 “I can’t figure it out myself. This Bishop just stands there and takes ’em and the umpires call ’em balls. He doesn’t look or act any tougher to pitch to than anybody else.” - Lefty Gomez

Second baseman Max Bishop earned the nickname "Camera Eye" because of his great eye at the plate. He was a lifetime .271 hitter with little power or speed, but he drew huge numbers of walks and scored lots of runs. Seven times in his career did he walk more than 100 times in a season and four times he scored more than 100 runs. Twice, he drew eight walks in a doubleheader.

After playing in the minors with the great Baltimore Orioles, he joined Connie Mack's Philadelphia Athletics in 1924 and spent the majority of his big league career with the club. He was the lead-off man for the A's teams that went to the World Series in 1929, 1930, and 1931, winning the Series in 1929 and 1930. After the 1933 season, Bishop was traded to the Boston Red Sox, along with pitchers Lefty Grove and Rube Walberg. He played two years with them before ending his career back with the Orioles of the International League in 1936.

Following his playing career, Bishop was a Detroit Tigers scout briefly before serving 24 years as baseball coach at the United States Naval Academy from 1938 to 1961, compiling a 317-161-7 record. He died shortly before he planned to announce his retirement. The Midshipmen today play home games at Terwilliger Brothers Field at Max Bishop Stadium.