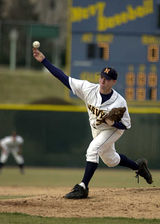 On April 1, 2017, the Washington Nationals played an exhibition game against the Boston Red Sox at the Academy, the first of three such annual games programmed by the team as a show of support for servicemen. Tickets for these game are only available to students at the Academy and members of the Navy.