Catcher and manager Al Lopez is a Hall of Famer who was twice an All-Star and held the record for most games caught with 1,918 until Bob Boone broke it in 1987. He also, as manager, took two teams to the World Series in the 1950s.

As a player, he never appeared in a World Series.

Lopez got his start as a manager in 1948 with the Indianapolis Indians of the American Association. He led the club to a league title in his first year and was the team's skipper for three seasons.

As a big league manager, Lopez led the Cleveland Indians to the World Series in 1954 and the Chicago White Sox to the Series in 1959. His clubs finished second to the New York Yankees every other year of the 1950s, but his 1954 Cleveland Indians had the most wins of the decade with 111. As a manager, he had a .584 winning percentage. 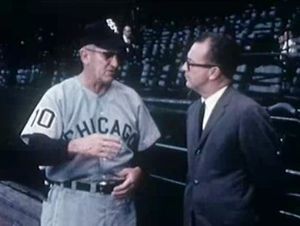 Al Lopez gives an interview to Ernie Harwell in the 1960's.

Ironically, shortly before his death in 2005, the White Sox returned to the World Series for the first time since 1959, this time winning the Series in a sweep with Ozzie Guillen as their manager. They swept the Houston Astros. It was the White Sox' first World Championship since 1917, when Pants Rowland was the manager. Lopez was the last living player who had played a game in the 1920s and the oldest living Hall of Famer at the time of his death.

"Lopez knows how he wants things run and he runs them that way. He's at his best with a club that acts and plays as intelligent professionals should. Yeah." Bill Veeck.