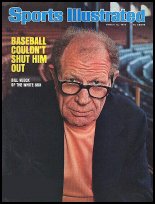 "Baseball is almost the only orderly thing in a very unorderly world. If you get three strikes, even the best lawyer in the world can't get you off." - Bill Veeck

"This is a game to be savored, not gulped. There's time to discuss everything between pitches or between innings." - Bill Veeck

". . . the knowledge of the game is usually in inverse proportion to the price of the seats." - Bill Veeck

One of baseball's most colorful characters, Bill Veeck was an owner of several major league clubs. Between 1947 and 1964, the only non-Yankee teams to win the AL pennant were the 1948 Indians (owned by Veeck), the 1954 Indians (built by Veeck), and the 1959 White Sox (owned by Veeck). Bill's father, Bill Veeck Sr. had been a Chicago sportswriter who became General Manager of the Cubs.

Prior to becoming a major league owner, he was the owner of the American Association's Milwaukee Brewers. In 1942 he was named Minor League Executive of the Year. He owned the Cleveland Indians from 1946 until 1949 and his club won the World Series in 1948. During Veeck's ownership, Larry Doby joined the Indians and became the first African-American player in the American League. Veeck also signed the legendary Negro League pitching star Satchel Paige. After selling the Indians, he bought the St. Louis Browns and became known for his promotional stunts, which included using midget Eddie Gaedel as a pinch hitter. He later owned the Chicago White Sox for two separate stints (1958-1961 and 1975-1981), and saw them reach the World Series in 1959. Five years after his death, he was inducted into the Hall of Fame.

William "Bill" Louis Veeck, Jr. (February 9, 1914 - January 2, 1986), also known as "Sport Shirt Bill", was a native of Chicago, IL, and franchise owner and promoter in Major League Baseball. He was best known for his flamboyant publicity stunts, and the innovations he brought to the league during his ownership of the Cleveland Indians, St. Louis Browns, and Chicago White Sox. Veeck was the last owner to purchase a baseball franchise without an independent fortune, and is responsible for many significant innovations and contributions to baseball.

While Veeck was growing up in Hinsdale, IL, his father, Bill Veeck Sr., became president of the Chicago Cubs. Growing up in the business, Bill Veeck worked as a vendor, ticket seller and junior groundskeeper. Despite never graduating high school, Veeck, was admitted to Kenyon College after passing the standardized College Board Exams (a forerunner of the SATs). In 1933, when his father died, Veeck left school, and eventually became club treasurer for the Cubs. In 1937, Veeck planted the ivy that is on the outfield wall at Wrigley Field. He married Eleanor Raymond in 1935. Whiule working for the Cubs, Veeck attended night school at Northwestern University for business and accounting and Lewis Institute for mechanical drawing.

In 1941 Veeck left Chicago and purchased the American Association Milwaukee Brewers, in a partnership with former Cubs star and manager Charlie Grimm. After winning three pennants in five years, Veeck sold his Milwaukee franchise in 1945 for a $275,000 profit.

While a half-owner of the Brewers, Veeck served for nearly three years in the Marines during World War II in an artillery unit. During this time, a recoiling artillery piece crushed his leg, requiring amputation first of the foot, and later of the entire leg. At this time Grimm had the chance to manage in the majors, and it was arranged for Casey Stengel to run the team. Later, when Veeck wanted to replace Lou Boudreau as manager of the Cleveland Indians, Veeck wanted Stengel for the job.

According to Veeck's memoirs, in 1942, before entering the military, he acquired backing to purchase the Philadelphia Phillies, planning to stock the club with stars from the Negro Leagues. He revealed his plans to Commissioner Kenesaw Mountain Landis, who effectively vetoed the idea by arranging for another owner to buy the team. Although this story has long been part of accepted baseball lore, in recent years, its accuracy has been challenged by researchers.

In 1946, Veeck finally became the owner of a major league team, the Cleveland Indians, using a debenture-common stock group making remuneration to his partners non-taxable loan payments instead of taxable income. In 1947, he paid $20,000 to the Newark Eagles for Larry Doby as the first African-American player in the American League. Unlike Branch Rickey, who knew that no Negro League team would stop a player from going into racially-unsegregated ball, Veeck bought players from the Negro Leagues. In 1948 he signed Satchel Paige, the oldest rookie in major league history; there was much speculation at the time about Paige's true age, with estimates from just under 40 to nearly 50.

When the Indians moved to cavernous Cleveland Municipal Stadium, Bill Veeck had a movable fence installed in the outfield that moved as much as 15 feet between series, depending on how the distance helped or hurt the Indians against a particular opponent. The American League passed a new rule fixing the outfield fences during any given season.

Veeck hired rubber-faced Max Patkin, the "Clown Prince of Baseball" as a coach. Patkin's appearance in the coaching box was the sort of promotional stunt by Bill Veeck that delighted fans and infuriated the front office of the American League.

Although he had become extremely popular, an attempt to trade Lou Boudreau to the Browns led to mass protests and petitions supporting Boudreau. Veeck, in response, visited every bar in Cleveland apologizing for his mistake, and reassuring fans that the trade would not occur. By 1948, Cleveland won its first pennant and World Series since 1920. Famously, Veeck buried the 1948 flag, once it became obvious the team could not repeat its championship in 1949. That year, Veeck sold his shares in Cleveland in order to finalize an expensive divorce with his first wife.

After marrying Mary Frances Ackerman, Veeck returned as the owner of the St. Louis Browns in 1951. Hoping to force the St. Louis Cardinals out of town, Veeck spited Cardinals owner Fred Saigh, hiring Cardinal greats Rogers Hornsby and Marty Marion as managers, and Dizzy Dean as an announcer; and he decorated their shared home park, Sportsman's Park, exclusively with Browns memorabilia. Although the Cardinals were easily the more successful team, it was the Browns, and thus whoever owned them, who owned the ballpark.

Some of Veeck's most memorable publicity stunts occurred during his tenure with the Browns, including the famous appearance by midget Eddie Gaedel for which Veeck predicted he'd be most remembered; and shortly afterward, Grandstand Manager's Day - involving Veeck, Connie Mack, Bob Fishel, and thousands of regular fans, directing the entirety of the game via placards: the Browns won, 5-3, snapping a four-game losing streak.

After the 1952 season, Veeck suggested that the American League clubs share radio and television revenue with visiting clubs. Outvoted, he refused to allow the Browns' opponents to broadcast games played against his team on the road. The league responded by eliminating Friday night games in St. Louis. When Saigh sold the Cardinals to Gussie Busch and Anheuser-Busch, Veeck realized he would never have the resources to compete. He began to look for other cities for the Browns to play.

In the early 1950s, Veeck considered moving the Browns back to Milwaukee (where they had played their inaugural season in 1901). The Milwaukee territory was owned by Lou Perini and the Boston Braves. Veeck bought the Toledo territory and attempted to force the Braves to move to Milwaukee and move the Brewers to Toledo, or he was going to draft the territory and move in. Perini eventually decided to move. He also wanted to move his club to the lucrative-yet-still untapped Los Angeles market, but decided there was not enough time to get a suitable ballpark. He had a deal in place to move the team to Baltimore, but the other owners were trying to bankrupt him and blocked the move. When Veeck was later forced to sell the Browns, the team had no problem moving to Baltimore and becoming the Orioles.

In 1959, Veeck became head of a group that purchased a controlling interest in the Chicago White Sox, who went on to win their first pennant in 40 years, and broke a team attendance record for home games with 1.4 million. His major partner was Hank Greenberg, and the two bought the majority shares owned by Dorothy Comiskey Rigney; her brother Chuck Comiskey refused to sell his shares, however, and did everything in his power to undermine the two new principal partners. The next year, the team broke the same record with 1.6 million visitors to Comiskey Park with the addition of the first "exploding scoreboard" in the major leagues - producing electrical and sound effects, and shooting fireworks whenever the White Sox hit a home run, and also began adding player's surnames on the back of their uniform, a practice now standard by 25 of 30 clubs on all jerseys, and by three more clubs on road jerseys. In 1961, due to poor health, Veeck sold his share of the team, only to return in 1975 as the full owner.

Almost immediately after taking control of the Sox for a second time, Veeck unleashed another publicity stunt designed to irritate his fellow owners. He and general manager Roland Hemond conducted four trades in a hotel lobby, in full view of the public. Two weeks later, however, Peter Seitz ruled in favor of free agency, and Veeck's power as an owner began to wane in opposition to richer owners. Ironically, Veeck had been the only baseball owner to testify in support of Curt Flood during his famous court case, where Flood had attempted to gain free agency after being traded to the Philadelphia Phillies.

Veeck presented a Bicentennial-themed Spirit of '76 parade on opening day in 1976, casting himself as the peg-legged fifer bringing up the rear. The same year, he reactivated Minnie Minoso for eight at-bats, in order to give Miñoso a claim towards playing in four decades; he did so again in 1980, to expand the claim to five. In an attempt to adapt to free agency, his Rent-A-Player model, centering on the acquisition of other clubs' stars in their option years, was moderately successful: in 1977, the White Sox won 90 games, and finished third behind Oscar Gamble and Richie Zisk. During this last run, Veeck decided to have announcer Harry Caray sing "Take Me Out to the Ballgame" during the seventh-inning stretch. On July 12, 1979, Veeck held one of his most infamous promotion nights, Disco Demolition Night, which resulted in a riot at Comiskey Park. Disco records were detonated on the field between games of a doubleheader with the Detroit Tigers. The White Sox were forced to forfeit the second game of the doubleheader when player safety could not be guaranteed.

Finding himself no longer able to financially compete in the free agent era, Veeck sold the White Sox in 1981. He retired to his home in St. Michaels, MD, where he had discovered White Sox star Harold Baines while Baines was in high school there. He is the father of Mike Veeck.

Veeck died of cancer at age 71, and was elected five years later to the Hall of Fame.

"It never ceases to amaze me how many of baseball's wounds are self-inflicted." - Bill Veeck

Some or all content from this article is licensed under the GNU Free Documentation License. It uses material from the Wikipedia article "Bill Veeck".