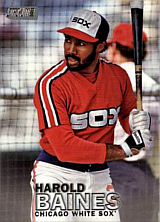 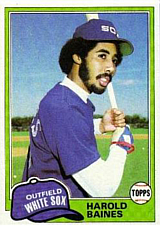 Few players in baseball history combined the longevity and consistency of Harold Baines. Baines was one of the most productive batters in baseball throughout his 22-year career, and his career numbers place him on the leaderboards for many important hitting statistics. When he was elected to the Hall of Fame by the Veterans Committee as part of its 2019 class, every eligible player with more career hits and RBI than him had already been inducted. Based on similarity scores, the player most similar to Harold Baines is Tony Perez, a Hall of Famer. Remarkably, Baines recorded double-digit homers every season from 1980 to 1997. He was the all-time leader for designated hitters in career hits, homers, and RBI when he retired (although he has since been passed by David Ortiz), and was one of the greatest players in the history of the Chicago White Sox.

As a hitter, Baines was a disciple of Charley Lau, the White Sox hitting coach during his early years in the majors, and he hit the ball to all fields (sacrificing some power in the process). He lifted his right foot off the ground as he started to swing the bat, like Mel Ott and Darryl Strawberry. Baines was considered a good right fielder with a strong arm early in his career, but never had much foot speed, and a knee injury he suffered at the end of 1986 relegated him to DHing for the rest of his career. By 1999, USA Today reported that he had had six knee surgeries.

Baines was signed as the number one overall pick in the June 1977 amateur draft by the White Sox and scout Ben Huffman after batting .532 in his senior year at St. Michaels (Md.) High School (Baines continues to reside in St. Michaels, MD to this day). White Sox owner Bill Veeck lived ten miles away from Baines and originally scouted him when he was a 12-year-old Little Leaguer. Baines advanced quickly through the minors and, after batting .298 with 22 homers and 87 RBI in 125 games with the Triple A Iowa Oaks in 1979, he was handed the right field position for the White Sox in 1980. He really came into his own in 1982, becoming the youngest Sock to record 100 RBI in a season. His 25 homers included a three-homer game against the Detroit Tigers on July 7th [1]. Baines finished tied for 20th in MVP voting at the end of the year, and he was rewarded with a four year, $3.25 million contract.

The "Winning Ugly" White Sox of 1983 romped over their Western Division opponents, and Baines was a large part of their success, hitting 20 homers with 99 RBI, and breaking the major league record in the long-forgotten game-winning RBI statistic with 22. He finished 10th in MVP voting. However, Baines went just 2 for 16 in the 1983 ALCS as the Sox fell to the Baltimore Orioles. Baines belted a career-high 29 home runs and led the American League with a .541 slugging percentage in 1984. On May 9th, he ended the longest game in major league history (8 hours and 6 minutes) (Boxscore), which had started the prior evening, by hitting a homer in the bottom of the 25th inning to give the Sox a 7-6 victory against the Milwaukee Brewers. 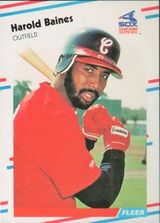 Baines hit .309 and recorded a career-high 113 RBI in 1985, finished 9th in the MVP voting, and was selected to the All-Star team for the first time. He singled against old teammate La Marr Hoyt in his one plate appearance (Baines would also be selected as an All-Star in 1986, 1987, 1989, 1991 and 1999). Baines continued to produce for the White Sox, but in September 1986, he hurt his right knee in a collision at first base with Neal Heaton and underwent surgery during the offseason. He aggravated the injury immediately after Opening Day in 1987 and went on the disabled list; when he returned, the White Sox installed him as a full-time DH. Baines had been a good defensive right fielder, but the knee problems were chronic and limited his mobility. He would remain a DH for the rest of his career, but he is the only player in baseball history to appear in over 1,000 games at both an on-field position and DH. On July 22, 1987, Baines hit his 154th homer as a White Sock to break the franchise record previously held by Bill Melton.

In the late 1980s, the White Sox descended into consistent mediocrity, and Baines's name began popping up in trade rumors. He got off to a blistering start for the moribund White Sox in 1989, ranking among the AL leaders in batting average and making the All-Star team. On July 30th, he was traded to the Texas Rangers, with Fred Manrique, for Scott Fletcher and two minor league prospects, Wilson Alvarez and Sammy Sosa. The Rangers were just 7 games out of first place at the time, but the acquisition of Baines failed to improve the team. The loss of the popular Baines was a blow to White Sox fans, and when he returned to Comiskey Park on August 20th in a Rangers uniform, the White Sox retired his number 3, putting him in some exclusive company. Phil Niekro and Frank Robinson were the only other active players to have had their uniform numbers retired. 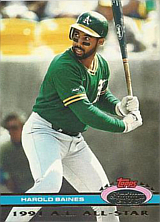 The Rangers and Baines got off to a slow start in 1990 and were never seriously in the race. Still, it stunned the baseball world when the first-place Oakland Athletics traded for Baines on August 30th, sending minor leaguer pitchers Joe Bitker and Scott Chiamparino to the Rangers. The Rangers had placed Baines on waivers on August 1st and no team bothered to claim him to block a potential trade. The acquisition of Baines and Willie McGee in separate deals gave the A's eight former All-Stars in their lineup. Not surprisingly, they cruised to the division championship. White Sox owner Jerry Reinsdorf was reportedly so enraged that GM Larry Himes allowed a division rival to acquire Baines that he decided not to renew Himes's contract. In Game 2 (Boxscore) of the ALCS against the Boston Red Sox, Baines had 3 RBI to lead the A's to a 4-1 victory, on their way to an eventual series sweep. The DH rule was only in effect for two games during the World Series and Baines was a non-factor as the A's were swept by the Cincinnati Reds. It would be his only Fall Classic appearance.

Baines had productive years for the Athletics in 1991 and 1992, helping the 1992 team win their division. In Game 1 (Boxscore) of the ALCS against the Toronto Blue Jays, his 9th-inning homer off Jack Morris gave the A's a 5-4 victory. However, the A's lost the series, and then decided to dismantle the club. Baines was subsequently traded to the Baltimore Orioles for minor league pitchers Bobby Chouinard and Allen Plaster.

After three solid years in Baltimore, Baines returned to the White Sox as a free agent in 1996 and helped lead them to a second-place finish. In 1997, the White Sox were just 4 1/2 games out of first place at the end of July but decided to cut payroll in what would be known as the Great Chicago Fire Sale. Baines, hitting .305 with 12 homers, was sent to the Orioles for minor leaguer Juan Bautista. The Orioles won the division and beat the Seattle Mariners in the ALDS, but lost to the Cleveland Indians in the ALCS. Baines played well during the postseason in a platoon role at DH with Geronimo Berroa. He re-signed to play with the Orioles in 1998 and moved into a platoon with fellow All-Stars Eric Davis and Joe Carter. Limited to less than 300 at-bats, Baines failed to hit 10 homers in a season for the first time, but still hit an even .300.

1999 was an amazing year for Baines. The 40-year-old began the season by driving in Will Clark for the winning run in the first game for a major league team in Cuba in 40 years, as the Orioles beat the Cuban national team, 3-2, in 11 innings. The big hit came off Pedro Luis Lazo in the first game of the 1999 Baltimore Orioles-Cuban National Team Exhibition Series. He then hit .343 through the first half of the season and was added to the All-Star team when Jose Canseco was unable to play. With the Orioles going nowhere and Baines hitting .322 with 24 homers through 107 games, he was again traded to a contender, the Cleveland Indians, for minor leaguers Juan Aracena and Jimmy Hamilton. He finished the year with 103 RBI, becoming the second 40-year-old in history to drive in more than 100 (after Dave Winfield). The fourteen-year gap between seasons of 100 RBI (1985 to 1999) is the longest ever. The Indians lost in the ALDS to the Red Sox, but Baines hit .357 in 4 games with a homer. 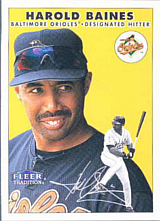 It was back to free agency after the 1999 season for hired gun Baines, and - no surprise - he ended up signing for a third go-round with the Orioles. There was no surprise when Baines put up another solid season as a part-time DH in 2000. And there was no surprise when the trading deadline rolled around and Baines was on the move to a contender again, this time for a third go-round with the White Sox. He was traded with Charles Johnson for Brook Fordyce and minor leaguers Jason Lakman, Juan Figueroa, and Miguel Felix. At the end of the year, Baines was named to the White Sox Team of the Century. Having helped the Sox win their division, Baines was re-signed for the 2001 season, but he had finally reached the end of the line, hitting just .131 in 32 games before severely pulling his hip flexor on June 14th. He returned from the disabled list to make one final appearance as a pinch hitter on September 27th and received a standing ovation from the Comiskey Park fans before striking out. I n his New Historical Abstract published in 2001, Bill James ranked Baines the 42nd best right fielder in baseball history. All told, Baines had played 1,643 games at DH, a major league record until David Ortiz passed him in 2014.

In 2003, Baines worked as a special instructor for the White Sox and, in 2004, he became the team's bench coach, serving in that capacity when the Pale Hose broke their 88-year World Championship drought in 2005. He managed several major league games while manager Ozzie Guillen had to serve various suspensions. Starting in 2006, he was the team's first base coach. In 2013, he changed duties on the coaching staff, moving from first base to the position of assistant hitting coach.

In 2007, he received 5.3% of the Hall of Fame vote, just enough to stay on the ballot. Other than the two players elected to the Hall in their first year, Baines and Mark McGwire were the only two new names who got enough votes to stay on the ballot. In 2008 voting he received 5.2% and in 2009 he got 5.9%. He survived the cut again in 2010 with 6.1% of the vote, which would be his peak total, but fell below the threshold in 2011. In 2017, he was placed on the Veterans Committee ballot looking at players and executives from "Today's Game" era, and after getting less than 5 votes, was again on their ballot in 2019. This time, he was elected, receiving 12 of 16 votes, joining Lee Smith who was a unanimous selection. The decision by the Veterans Committee was considered puzzling, given his poor performance in votes until then. His biggest asset was his longevity (22 seasons) but even then his counting stats were not that impressive; for example, he failed to reach 3,000 hits, an important milestone for a hitter with his profile. He consistently hit 20+ homers per season (11 times) but never once reached 30 homers. He also had little defensive value for the final two-thirds of his career, when he was largely a DH. What he had working in his favor were two huge fans who were members of the Committee, White Sox owner Jerry Reinsdorf and former manager Tony LaRussa, and a reputation as a very nice person who always went on with his business with utmost professionalism and a complete avoidance of controversy.

His son, Harold Baines Jr., played in the minors.