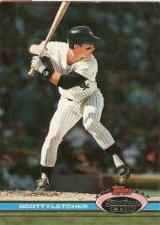 Fletcher was drafted three times (by the Los Angeles Dodgers, Houston Astros, and Oakland Athletics) prior to being taken by the Chicago Cubs in the 1979 amateur draft. He made his pro debut that summer with the Geneva Cubs and hit .310 in 67 games. He reached the majors with the Cubs in 1981, but with his playing time limited behind Ryne Sandberg and Larry Bowa, he was dealt across town to the Chicago White Sox prior to the 1983 season. In his first year with the Sox, he was platooned with Jerry Dybzinski at shortstop, and the next season, he had the job to himself. However, he lost his regular role in 1985 with the emergence of Ozzie Guillen and was traded to the Texas Rangers at the end of the year.

Fletcher hit .300 (and .318 in the first half) in 1986, his first year with the Rangers, while taking over as the team's regular shortstop. The next season, he hit a career-high 5 home runs and drove in a career-best 63 runs. However, after a slow start in 1989, hitting .239 through 83 games, he was traded back to the White Sox (along with Sammy Sosa) at the trade deadline. Chicago made him their regular second baseman, a job he held through the end of the 1991 season. He ended his big league career following stints with the Milwaukee Brewers, Boston Red Sox, and Detroit Tigers.

Fletcher's father, Richard W. Fletcher, was a minor league pitcher from 1952 to 1959 (Scott was born while his father was managing the Fort Walton Beach Jets). His son, Brian Fletcher, was drafted by the Houston Astros in the 39th round of the 2007 amateur draft. His son-in-law Gordon Beckham played in the majors.