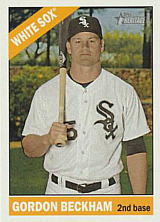 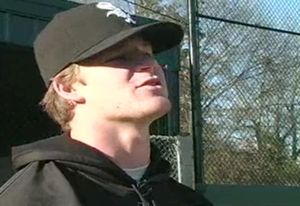 Gordon Beckham was a first-round pick of the 2008 amateur draft. Oddly, he was not even the first shortstop named Beckham from Georgia taken in the draft as Tim Beckham went first. He is the son-in-law of Scott Fletcher and brother-in-law of Brian Fletcher.

Beckham was a football and baseball star in high school, hitting .456 as a senior. As a college freshman, Gordon batted .280/.348/.490 with 12 home runs and played in the 2006 College World Series. Baseball America and Collegiate Baseball named him a freshman All-American. On the Baseball America team, he joined Justin Smoak, Jemile Weeks and Pedro Alvarez on the first-team infield. All were taken in the first 12 picks of the 2008 draft. The shortstop hit .307/.399/.570 with 19 doubles and 13 homers as a sophomore. In his junior year, he batted .411/.519/.804, stole 17 bases in 21 tries (caught the last 3 times), scored 97 runs and drove in 77 in 71 games and set a University of Georgia record with 28 home runs to win Southeastern Conference Player of the Year honors. He was a finalist for the Golden Spikes Award and set a Georgia record with 53 career homers, the 52nd coming in Game 1 of the finals of the 2008 College World Series. He tied Matt Clark for the NCAA Division I lead in home runs and made the 2008 CWS All-Tournament Team at shortstop as Georgia finished runner up.

Scouted by Nick Hostetler and Kevin Burrell, the Chicago White Sox took Beckham with the 8th pick of the 2008 amateur draft. He debuted on August 15 for the Kannapolis Intimidators and went 3 for 4 with a walk, a double and 2 runs scored in a fine start to his pro career. By spring training 2009, he was being identified as on the fast track to the major leagues, and there was talk of his starting the year with the White Sox. That did not happen, but he confirmed his lofty status by making his debut with the Pale Hose in early June. He had trouble getting his bearings at that level, going hitless in his first two games and only 2 for 22 in his first six. He settled down after that, hitting a solid .270/.347/.460 in 103 games with 28 doubles and 14 homers. The performance earned him the spot as the third baseman on the 2009 Topps All-Star Rookie Team.

Beckham moved to second base in 2010 after the Sox acquired Mark Teahen to play third in the offseason. Gordon fell back from his rookie year, hitting .252/.317/.378 in 131 games, with only 25 doubles and 9 homers. Concerns about his falling production increased in 2011, as he was only hitting .228 by the end of June, with falling on-base and slugging numbers as well, although he was still playing every day at second. He kept his job, playing 150 games, but his hitting hardly improved as he ended the season at .230/.296/.337, for an OPS+ of 70. He repeated that performance almost exactly in 2012, with 151 games hitting .234/.296/.371. The better slugging percentage was almost entirely the result of setting a personal best for home runs with 16. He was by then solidly entrenched in the Sox's batting order, but while it was clear to most observers that his lack of production with the bat was dragging down the team, the Sox were not seeking to replace him, hoping instead - perhaps improbably - that he would bounce back to his rookie numbers.

Beckham started 2013 a bit better, as he was hitting .316 (albeit with only one walk and no extra-base hits) in his first 7 games. That is when he suffered a wrist injury when he fouled a ball off his hands on April 9, breaking his left hamate bone. The injury required surgery and a long layoff. He returned on June 3 and played regularly the rest of the way, finishing with a .267 average - his highest since his rookie season - in 103 games. He hit only 4 homers and had 24 RBI, so he was still far from an offensive force. He struggled some more with the bat in 2014; after 101 games, he was hitting .221 with 7 homers and 36 RBI. At that point, the White Sox decided that he would never be even an average offensive player (his career OPS+ was 83 with his rookie season the only one in which he was above 100) and traded him to the Los Angeles Angels of Anaheim on July 21 in return for future considerations. The first-place Angels made it clear he was not there to start, but only to provide some depth at second and third base. He played 26 games for the Angels, getting only 56 at-bats, during which he hit .268. He got to play in the postseason for the first time, going 0 for 1 in two appearances against the Kansas City Royals as the Angles were swept in the Division Series.

On February 4, 2015, the Angels sent minor league pitcher Yency Almonte to Chicago to complete the previous summer's deal. Ironically, that same day, Beckham returned to the Sox, signing a one-year deal for $2 million. He played 100 games for Chicago, hitting .209 with 6 homers and 20 RBI, playing mainly at third base, losing the starting job late in the year to rookie Tyler Saladino. He was a free agent after the season and, on December 2, signed a one-year deal with his hometown team, the Atlanta Braves. Battling through a hamstring injury that sidelined him twice, Gordon slashed .217/.300/.354 and was dealt to the San Francisco Giants with six games left in the season for a minor leaguer. He logged 3 fruitless games with San Fran, then requested his release at the end of 2017 spring training, with the writing on the wall that he would not make the team. He settled for minor league deals in back to back seasons with the Seattle Mariners, logging just 33 big league games over the two seasons with a miserable .180/.242/.197 slash. In 2019, he signed a minor league deal with the Detroit Tigers and made the team; in 83 games, he slashed .215/.271/.372 with 6 home runs in 240 plate appearances.