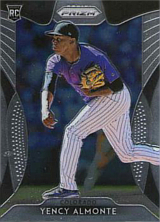 Pitcher Yency Almonte was a 17th round selection by the Los Angeles Angels of Anaheim in the 2012 amateur draft, out of a high school in Miami, FL. He had no decisions in 3 appearances for the AZL Angels that season, then in 2013 was a starter with the Orem Owlz of the Pioneer League, where he went 3-3, 6.92. In 2014, he split his time between the AZL Angels and the Burlington Bees, putting up a combined mark of 2-6, 5.91.

On February 4, 2015, Yency was sent to the Chicago White Sox as the player to be named later in the trade which had brought veteran infielder Gordon Beckham to the Angels the previous August. Ironically, Beckham re-signed with the White Sox as a free agent the day Almonte's name was announced as the PTBNL. Yency split the 2015 season between the Kannapolis Intimidators of the South Atlantic League, where he was 8-4, 3,88 in 17 games, and the Winston-Salem Dash of the Carolina League, where he went 3-3, 2.42. Altogether his record was 11-7, 3.41 in 24 games, including 22 starts, with 110 strikeouts in 137 1/3 innings. On November 24th, he was involved in another trade for a major leaguer, this time heading to the Colorado Rockies in return for P Tommy Kahnle.

Almonte made his debut with the Rockies midway through the 2018 season.