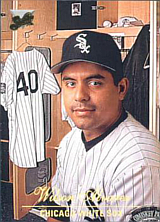 Pitcher Wilson Álvarez was the first major leaguer to debut to be born in the 1970s. He did not retire a batter in his major league debut on July 24, 1989 for the Texas Rangers against the Toronto Blue Jays. He gave up a single, followed by back-to-back homers and back-to-back walks, departing with a big league ERA of infinity. He returned to the minors immediately thereafter and was not used again in the majors by the Rangers. He was traded to the Chicago White Sox five days later, in a deal involving Sammy Sosa and future Hall of Famer Harold Baines. Álvarez did not pitch again in the major leagues until August 11, 1991. In his debut with the Sox, he threw a no-hitter against the Baltimore Orioles, bringing his career ERA down to a more respectable 3.00.

Even with his promising start with the Pale Hose, it took Álvarez a couple more seasons to fully establish himself as a major league pitcher. By 1993, he was a key member of the starting rotation, winning 15 games for the AL West champions. He pitched a complete game victory over the Blue Jays in the 1993 ALCS, then was named to the AL All-Star team in 1994. He again won 15 games in 1996 and was one of the team's top starters in the first half of the 1997 season, going 9-8, 3.03 over his first 22 starts. The White Sox traded Álvarez to the San Francisco Giants in the so-called "White Flag Trade" on July 31, 1997. He finished the year with the Giants, starting and losing a game in the NLDS against the Florida Marlins. He was granted free agency after that season and signed with the expansion Tampa Bay Devil Rays.

Unfortunately, injuries kept Álvarez from reaching his full potential with the Devil Rays. He missed two months in 1998 and lost 14 games. He was also plagued by injuries in 1999. He underwent arthroscopic surgery and missed two seasons. After returning to the team in 2002, he was released on September 30th. On January 31, 2003, Álvarez signed with the Los Angeles Dodgers. He began the season as a starter for the Triple A Las Vegas 51s, and eventually earned a reliever's role with the big league club. Later in the year, he made 12 starts. Álvarez was a free agent after the season and signed again with the Dodgers. He went 7-6 with a 4.03 ERA in 2004, and pitched one final time in the postseason, suffering a loss in two relief appearances in the NLDS. He signed with the Dodgers for a third time and went 1-4 with a 5.63 ERA in 2005. On August 1st, he announced he was retiring from Major League Baseball.

In a 14-year career, Wilson Álvarez compiled a 102-92 record, a 3.96 ERA, and 1,300 career strikeouts in 355 games. He was a hard thrower and had some control problems early in his career, leading the AL with 122 walks in 1993 and topping 90 three other times. When he came back from his injuries in 2002, he was a different pitcher, relying more on location and control than on raw power.

According to his wife, Vannessa Álvarez, he is now enjoying life with her, three beautiful daughters and two dogs. She adds that he is really thankful for having been able to play in the major leagues, because he never knew he was going to play in the big leagues and that is why he is thanking God everyday for how fortunate he has been. "Thanks again to all the fans, cause if it weren't for you I wouldn't love playing BaseBall, you are the ones that kept me in this and I am including my wife" said Wilson Álvarez.