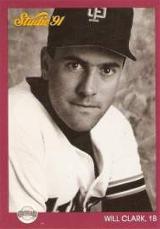 "There's no doubt Will comes to play every day and he plays hard." - Tom Glavine

“I regard a lot of our guys as indispensable, but if I had to pick one, it would be Will Clark. In addition to his natural ability, he has the charisma that puts people in the park.” - Roger Craig

Originally selected by the Kansas City Royals in the fourth round of the 1982 amateur draft, Clark did not sign. Instead, he went to Mississippi State, where he rose to stardom along with teammates Rafael Palmeiro and Bobby Thigpen. Clark and Palmeiro were known as "Thunder and Lightning" and together, they powered the Bulldogs offensive attack while developing an overwhelming dislike for each other. During his college years, Will was a member of the 1984 Olympic team (along with Mark McGwire and B.J. Surhoff). The following year, he won the Golden Spikes Award as the nation's top amateur player, while Mississippi State reached the College World Series. For his collegiate play, he has been inducted into the College Baseball Hall of Fame, the Cape Cod Baseball League Hall of Fame (playing during the summer of 1983) and the Mississippi Sports Hall of Fame.

Clark was selected by the San Francisco Giants with the second overall pick, behind Olympic teammate B.J. Surhoff, in the 1985 amateur draft. This was one of the most talented draft classes in history, featuring players such as Barry Bonds, Barry Larkin, Bobby Witt and Gregg Jefferies, as well as Surhoff and Palmeiro. He was signed by scout Ken Parker and made his pro debut with the Fresno Giants on June 21st. Clark hit a home run in his first pro at-bat (on his first swing no less), and hit .309 with 10 homers and 48 RBI in 65 games.

After the 1993 season, Clark became a free agent and signed with the Texas Rangers, where he replaced former college teammate Palmeiro at first base in a no doubt awkward situation. Although his numbers were not quite as good as with the Giants, he did hit over .300 in four of his five years with the Rangers, and the team reached the postseason in 1996 and 1998. He signed with the Baltimore Orioles after the 1998 season (once again replacing Palmeiro as the team's first baseman). An early season highlight came when he scored the winning run against Pedro Luis Lazo in first game of the 1999 Baltimore Orioles-Cuban National Team Exhibition Series. He struggled with injuries that summer, appearing in only 77 games (but still hitting .303). Midway through 2000, he was traded to the St. Louis Cardinals for Jose Leon. Even though he did extremely well with his new team, hitting .345/.426/.655 with a 166 OPS+, he announced his retirement at the end of the year, finishing his career with a .303 average, 284 home runs and 1,186 runs scored.

In the 2006 Hall of Fame voting, Clark received 4.4% of the vote in his first year on the ballot. He needed 26 votes to stay on the ballot, but got only 23. He finished ahead of Dwight Gooden, who got 3.3%. In 2017, he was placed on the Veterans Committee ballot looking at players and executives from "Today's Game" era. He received less than five votes, but was again considered by the Veterans Committee in 2019, falling short. It was announced by the Giants that his number 22 would be retired during the 2020 season.

At one point, Clark owned a restaurant with Hall of Fame quarterback Troy Aikman.