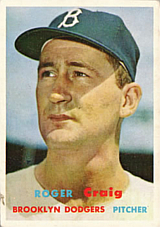 "Three runs behind in the first inning or not, there was something magical about playing in the World Series as far as Roger Craig was concerned. As Bing Devine was putting this team together over the previous winter, one of the keys, he decided, was his acquisition of Craig from the Mets. Devine thought that a pitcher like Craig, who could work as either a spot starter or a middle relief pitcher, was what he needed; if going to a contending team from a last place team gave Craig the proper emotional boost, and if his arm was right, he might be a determining factor -- if not the winning pitcher -- in some ten or fifteen games. Getting him might not seem as important in statistical terms as trading for a twenty game winner, but in the hot days of August, important games could be won or lost in the middle innings, when everyone was dulled by the torpor. Games slipped away then because pitchers were tired, the bullpen was overused and the level of concentration of the team dropped. With the addition of the right pitcher, leads could be preserved, games saved, Devine thought." - David Halberstam, October 1964 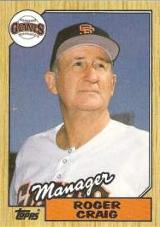 A successful pitcher with the Brooklyn Dodgers and, later, a 20-game loser with the expansion 1962 New York Mets, Roger Craig enjoyed a long second life after twelve big league seasons as a pitching coach and manager.

Craig was signed by the Dodgers in 1950. While in the minors, Craig missed the 1952 and 1953 seasons due to military service during the Korean War. He came up as a rookie in 1955, spinning a complete game three-hitter against the Cincinnati Redlegs in his debut on July 17th. Armed with a 5-3, 2.78 record as a swingman, he came of age right on time to be a member of the only World Series-winning team in Brooklyn history. Roger earned one of the victories, combining with Clem Labine to stop the New York Yankees, 5-3, in Game 5.

That performance, coupled with the expansion that put a National League team back into New York as well as a new outfit in Houston, left Roger ripe for the New York Mets plucking him in the ensuing expansion draft. He entered the record books by losing the first game in club history, an 11-4 laugher to the St. Louis Cardinals in which he started. He was truly the team's workhorse, tossing 13 complete games and saving 3 games in 233 1/3 innings for the miserable 1962 slog while crafting a 10-24, 4.51 record, pacing the NL in losses. In an effort to break a personal 18-game losing streak, Craig tried wearing the number 13 in 1963 for a spell, improving his ERA to 3.78 with 14 complete games and 2 saves in a personal best 236 innings. Unfortunately, his record was 5-22, again leading the league in losses.

Following that season, Roger got a death row pardon from Bing Devine of the St. Louis Cardinals, joining the club in time to win a third World Series ring. Though he was not the iron man of his Mets seasons, he was an effective swingman, pitching 166 innings en route to a 7-9, 3.25 mark in 1964. He picked up the win Game 4 of the Fall Classic against the Yankees, tossing five scoreless innings in two appearances. His big league days came to a head after bits of two seasons exclusively in relief with the Cincinnati Reds and Philadelphia Phillies.

In retirement, Craig scouted for the Dodgers in 1967, then was the manager of the Albuquerque Dodgers in 1968. He was a coach with the expansion San Diego Padres from 1969 to 1972. Craig was a minor league pitching coach for the Los Angeles Dodgers in 1973 before being a part of the Houston Astros staff in 1974 and 1975; both for the Padres and Astros, he worked under manager Preston Gomez. He re-joined the Padres the next season, 1976, and began a two-year stint as the club's manager in 1978 when Alvin Dark was fired in spring training. That year, he led the team to its first-ever winning record, but the team sank back into last place in 1979 and he was dismissed following the season. After leaving San Diego, he was a Detroit Tigers coach from 1980 to 1984, leaving after the team won the World Series. He took over as manager of the San Francisco Giants in late 1985 and remained with them through the 1992 season, leading the club to the World Series in 1989.

Craig was one of the big-time boosters and practitioners of the split-fingered fastball. Among his star pupils were Jack Morris, who now is immortalized in Cooperstown, and Mike Scott, who rode the pitch to an otherworldly 1986 with the Houston Astros after being on the fringes of the big leagues prior. Other pupils included a pair of men known by the handle "Señor Smoke": Juan Berenguer and Aurelio Lopez.

In his first full year as Giants' manager, Craig made "Humm Baby" the phrase of 1986. A player he liked was a "humm baby," a good play was a "humm baby of a play", one could merely exhort "humm baby" from the dugout in lieu of a "let's go"... the potential uses were infinite. Brad Gulden, a backup with the 1986 squad, is believed to be the original "Humm Baby".