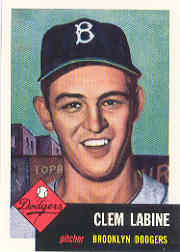 "I always thought Clem would've had a great career as a starting pitcher. But he told me 'I didn't want to start. I liked the pressure of coming into the game with everything on the line'." - Carl Erskine

Clem Labine pitched 18 seasons, 1944 to 1962, 13 in the Major Leagues and eight in the minors, losing one year to the Military. He served in the U.S. Armed Forces during World War II (1945-1946) (BR). His name was usually pronounced luh-BYNE by broadcasters, although it would originally have been lah-BIN (rhymes with cabin, but with the stress on the second syllable).

The son of an immigrant family from Quebec who worked in the textile mills of Woonsocket, RI, Labine only spoke French until the age of 7. He was an excellent athlete as a youth and was signed by the Brooklyn Dodgers as an amateur free agent in 1945, dropping out of high school after having been scouted by Branch Rickey and Chuck Dressen. He pitched for the Dodgers, Detroit Tigers, Pittsburgh Pirates and New York Mets from 1950 to 1962. He spent parts of four seasons in AAA with the St. Paul Saints, but for some reason never got to play for the Dodgers' other top farm team, the Montreal Royals, where he would doubtless have been a huge fan favorite.

The free-spirited sinkerballer was one of baseball's premier relievers in the 1950s. He helped the Dodgers to four pennants in Brooklyn and another in Los Angeles. His first taste of glory came as a rookie during the 1951 three-game playoff between the Brooklyn Dodgers and New York Giants; he shut out the Giants 10-0 on October 2nd, evening the series at one game apiece and setting the stage for the Shot Heard 'Round the World the next day. After experiencing arm troubles in 1952 and going back to St. Paul for a spell, he became the Dodgers' relief ace in 1953, taking over from the previous year's rookie sensation, Joe Black. He was 11-6 with 7 saves that season but was the losing pitcher in the deciding game of the World Series on October 5th, when he gave up a single to Billy Martin of the New York Yankees in the bottom of the 9th, scoring Hank Bauer. He had also been charged with the loss in Game 1, on September 30th, when he gave up a go-ahead home run to Joe Collins in the 7th inning, but did earn a save in of Billy Loes' victory in Game 4. Those two losses in a six-game Series tied a record.

Labine was 13-5 in a NL-leading 60 appearances for the 1955 World Champions and led the league in saves the next two seasons. In 1955, although he was never a threat at bat, Labine's three hits were all home runs; he had set another hitting mark in 1954 by drawing two walks in an inning on August 8th. During the 1955 World Series, he won Game 4 on October 1st by pitching 4 1/3 innings in relief, then came back the next day with three innings in relief of Roger Craig to save Game 5. One of his brightest moments came in another rare appearance as a starter, when he pitched a 10-inning 1-0 shutout in Game 6 of the 1956 World Series on October 6th, on the day after the Yankees' Don Larsen had pitched a perfect game against the Dodgers.

By the time the Dodgers returned to the World Series in 1959 after having relocated to Los Angeles, Labine had lost his spot as the bullpen ace to Larry Sherry, after going 5-10, 3.93 during the regular season. His last post-season appearance for the Dodgers came in Game 1 of the 1959 World Series, when he pitched a scoreless inning in a 11-0 loss to the Chicago White Sox. After leaving the Dodgers, Labine pitched for the Pirates in the 1960 World Series, after having joined the team at the end of the season following stops with the Dodgers and Detroit Tigers. He was hit very hard in that bizarre World Series, allowing 6 runs and 13 hits, including a grand slam by Bobby Richardson, in 4 innings over three appearances, all of them in lopsided Pirate losses. Yet he still had one effective season left in the tank, going 4-1, 3.69, with 8 saves for the Pirates in 1961. He completed his career with three games for the woeful New York Mets of 1962, giving up 5 runs in 4 innings to finish with a lifetime record of 77-56, with 96 saves and a 3.63 ERA in 513 games, only 38 of which were starts.

After his retirement, Labine returned to Woonsocket where he became a sales executive for the Sports Apparel Company, a manufacturer of sports team jackets. He had had a long-time interest in the designing of sports clothes, even drawing sketches of designs while pitching for the Dodgers. He features prominently in Roger Kahn's classic book about the Brooklyn Dodgers, The Boys of Summer.

"He had the heart of a lion and the intelligence of a wily fox, and he was a nice guy, too." - Vin Scully

In "The Boys of Summer", Labine was quoted as saying to Roger Kahn: "Do you know I got Stan Musial out forty-nine times in a row? Somebody counted and told me." Although a number of sources (including MLB.com) have subsequently quoted this statistic without comment, it is extremely incorrect. Labine does nevertheless deserve credit for his pitching to Musial.