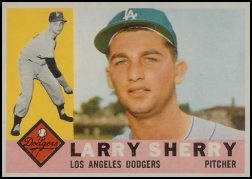 Larry Sherry had an eleven-year major league career as a pitcher, going 53-44. He was a sensation in the 1959 World Series and was named its MVP. His brother Norm Sherry was a catcher with the Dodgers from 1959 to 1962, and the two were sometimes a battery for the team. Another brother, George Sherry, was a pitcher in the Pittsburgh Pirates chain in 1951.

Larry was signed by the Brooklyn Dodgers three years after his brother Norm, but made it to the big leagues with the Dodgers one year earlier than Norm for a cup of coffee in 1958.

In 1957, he pitched for the minor league Los Angeles Angels, where Tommy Lasorda was a teammate.

In 1959, he was 7-2 with a 2.19 ERA on a team whose team ERA was 3.79. In the World Series, against the Chicago White Sox, he appeared in four games, pitching 12 2/3 innings with a 0.71 ERA. He won two games, the fourth game and the sixth - which was the winning one for the Dodgers. Sherry also recorded saves in the other two Dodger victories.

He spent 1964 through part of 1967 with the Detroit Tigers. The Tigers were a good team whose won/loss record increased steadily during the time that Larry was there, but he was not to be part of their World Series team in 1968. In 1964, he saved 11 games and won 7, and in 1966, he saved 20 games and won 8. That year, he was third in the American League in saves. He spent the second half of 1967 with the Houston Astros and then closed out his career with 3 games for the California Angels in 1968.

After his playing career ended, Larry Sherry was a Pittsburgh Pirates coach in 1977 and 1978 and a member of the California Angels coaching staff in 1979 and 1980.

He is a member of the Baseball List of Rhyming Names, along with such notables as Don Hahn, Paul Schaal, Lu Blue, Still Bill Hill, Mark Clark, and Greg Legg.

Sherry was a graduate of Fairfax High School in Los Angeles and with his outstanding performance in the 1959 World Series, he was the Dodgers' first homegrown hero in L.A. With his brother Norm, he formed half of a brother battery, although Norm was never the Dodgers' primary catcher. Major League baseball has featured several fraternal pitcher-catcher tandems over the decades, the most famous of which are probably Wes Ferrell and Rick Ferrell, and Mort Cooper and Walker Cooper.