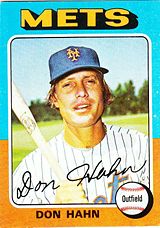 Don Hahn was a light-hitting outfielder with the Montreal Expos, New York Mets, Philadelphia Phillies, St. Louis Cardinals, and San Diego Padres from 1969 to 1975. He was the starting centerfielder for the Expos in the first game in franchise history, on April 8, 1969, against the New York Mets in what was his major league debut. However, he only played 4 games before being sent down to the minors. After spending the 1970 season with Montreal, he was traded to the Mets before the 1971 season in return for Ron Swoboda and Rich Hacker. He was the Mets' starting centerfielder in the 1973 World Series, taking over for an aging Willie Mays.

After the 1974 season, the Mets traded him to the Phillies along with Tug McGraw and Dave Schneck in return for Mac Scarce, John Stearns and Del Unser in what was a blockbuster trade. However, he was not able to secure a regular job with Philadelphia and was released at the end of May, 1975, then played with two more teams that year. He was versatile enough to play all three outfield positions, and was considered a very good defensive centerfielder, but he did not hit much - .236 with a slugging percentage of .303, which is why his career ended early.

He is a member of the Baseball List of Rhyming Names, along with such notables as Larry Sherry, Paul Schaal, Lu Blue, Still Bill Hill, Mark Clark, and Greg Legg.