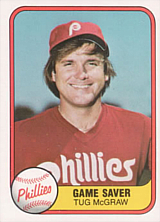 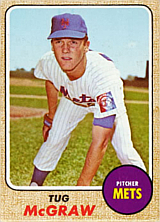 Tug McGraw was one of the most interesting players of all-time. He pitched 22 years, one in the Western Canada League (semipro), 19 in the Major Leagues and parts of four in the minors. A left-hander who threw a screwball, McGraw was a bit of screwball himself - a fan favorite in New York, Philadelphia and throughout the majors.

He came from Vallejo Junior College to pitch for Lethbridge in the 1963 Western Canada Baseball League and was signed by Roy Partee of the New York Mets as an amateur free agent in 1964 when he called Partee to ask for a tryout. McGraw pitched 19 years with the Mets (1965-1974) and Philadelphia Phillies (1975-1984).

A member of the '69 Miracle Met world champion squad, Tug is perhaps most closely associated with "Ya Gotta Believe", his mantra during the Mets' 1973 National League Championship season that may or may not have been the result of him mocking a speech delivered to the players by Mets executive M. Donald Grant. Sixteen times in the last month of that season, he charged off the mound slapping his glove on his right thigh, screaming at no one in particular while racking up 11 saves and four victories. While McGraw was one of the main reasons the Mets were able to capture the National League flag, he was also one of the reasons they had to catch up. He was going through a horrible slump, blowing leads and getting his pitching and pride pounded. The Mets, ultimately the only team to finish over .500 for the season in the National League East, began their climb from last place, 12 1/2 games out. By August 30th, they were 6 1/2 out and McGraw was 0-6. Tug returned to form, and the Mets reached first place to stay on September 21st. McGraw finished the '73 season with 25 saves.

A turnaround by McGraw also contributed heavily to the Mets' miraculous run of 1969, when they won 38 of their last 49 regular-season games to win the division by eight games over the Chicago Cubs. During those 49 games, McGraw pitched 29 2/3 innings and was charged with only two runs.

And yet, McGraw's best year was actually 1972, when he posted an 11-4 record with 27 saves and a 1.70 ERA. He also was credited with the victory in the 1972 All-Star Game, giving up only one hit and striking out four in working the final two innings. His shining moment as a Phillie came in the 1980 World Series. In Game 5, McGraw struck out the Kansas City Royals' Amos Otis with the bases loaded in the bottom of the 9th to preserve a 4-3 victory. In the sixth and final game, in Philadelphia, McGraw squeezed out of bases-loaded jams in the final two innings and got the save to give the Phillies their first World Championship. It was his third World Series save lifetime, and his five League Championship Series saves is a record. He retired with 180 saves in the regular season.

The most famous image of Tug McGraw is of him leaping in the air after striking out Willie Wilson of the Royals to win the 1980 World Series for Philadelphia. Another memorable image was of him pounding his glove against his thigh after another big out during the 1973 season. After his retirement, he made frequent appearances as a baseball reporter for WPVI-TV in Philadelphia. Prior to his death, McGraw was able to take part in ceremonies commemorating the closing of Veterans Stadium.

He contracted brain cancer and battled the disease for ten months when he underwent surgery for a malignant tumor. Sadly, McGraw died from it at age 59 on January 5, 2004 at the home of his son, country singer Tim McGraw. "Live Like You Were Dying", Tim's tribute song to his dad, spent seven weeks at #1 on the Billboard Country Music chart and was ultimately determined the #1 country song for the year 2004.

After the Phillies won the 1980 National League Championship Series in the 10th inning of an 8-7 game filled with sensational plays, he said, "It was like riding through an art gallery on a motorcycle."

"Ten million years from now, when the sun burns out and the earth is just a frozen iceball hurtling through space, nobody's gonna care whether or not I got this guy out."

"Some days you tame the tiger. And some days the tiger has you for lunch," his way of explaining a reliever's life on the edge, working when the game is there to be won or lost.