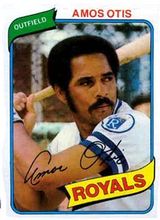 Amos Otis played 17 years in the big leagues, accumulating over 2,000 major league hits. Otis was a well-rounded ballplayer, winning three Gold Gloves for his play in center field, hitting .300 twice at a time when league averages were lower than today, leading the league twice in doubles and once in stolen bases, and banging out 193 home runs along with 374 doubles. He was a five-time All-Star who twice finished in the top five in the MVP voting.

He was the All-Star 1B in the 1966 New York-Penn League for the Oneonta Red Sox. After the season, he was drafted by the New York Mets, but he never played a game at 1B in the majors. After the 1969 season, he was traded from the Mets to the Kansas City Royals in return for Joe Foy in a classic boneheaded Met deal. Otis played 14 seasons with the Royals; Foy, another in a long line of third basemen in the Mets never ending quest to find a star there, was out of the bigs after the 1971 season. Amos was a regular from the time he joined the team in 1970, until practically his last game with the Royals in 1983. In 1986, he and Steve Busby were the inaugural inductees into the Kansas City Royals Hall of Fame.

In 1989, Otis played for the Fort Myers Sun Sox of the Senior Professional Baseball Association and hit .332 with 11 home runs in 62 games for the club. In 1990, he again played for the Sun Sox; he played in 10 games and batted .241 with 5 RBI before the league folded.

The similarity scores method sees the most similar player through 2009 as Cesar Cedeno.