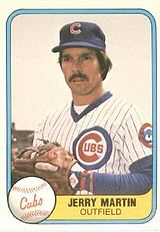 Always a promising young outfielder with the Philadelphia Phillies of the 1970s, Jerry Martin never fulfilled his promise. He also played for the Chicago Cubs, San Francisco Giants, Kansas City Royals, and New York Mets. He had a good arm but never really hit for great power or average. Martin hit 19 home runs for the Cubs in 1979 and 23 in 1980 in what were his two best years. After leaving Chicago he only hit 4 home runs for the Giants in 1981.

He was one of five players suspended for one year by Commissioner Bowie Kuhn after the 1983 season because of cocaine use. Three of the players had been his teammates with the Royals: Willie Aikens, Vida Blue and Willie Wilson; the fifth was Steve Howe. Martin, Aikens and Wilson saw their suspension lifted by an arbitrator on May 15th, 1984, because they had complied with the conditions set by Major League Baseball. Martin joined the Mets for the remainder of the 1984 season, but was no longer an effective player and retired after the season.

In 1989, he played for the St. Petersburg Pelicans and Orlando Juice of the Senior Professional Baseball Association. He hit .281 with 39 RBI for the teams. In 1990, he was with the Fort Myers Sun Sox, also of the SPBA. He played in 19 games and was batting .189 when the league folded.

Martin was a minor league coach in the Philadelphia Phillies and Detroit Tigers organizations for over 20 years before retiring at the end of the 2012 season.

Martin is the son of Barney Martin and brother of Mike Martin. Per Peter Golenbock's The Forever Boys, a chronicle of the 1989 SPBA season, Martin got his foot in the door as a non-drafted free agent with the Phillies thanks to the high draft stock of his brother, a pitcher and the 5th overall selection in the June 1970 draft. Mike blew his arm out in the minors while Jerry made it to the bigs.