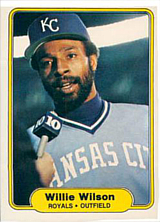 Willie Wilson played nineteen years in the major leagues, leading the American League in batting in 1982 and five separate times in triples. He was a speedster, ranking 12th on the all-time list for stolen bases. Author Bill James developed a "speed score" which demonstrated that Wilson was the fastest player in Major League Baseball.

Wilson served 81 days in federal prison prior to the 1984 season, pleading guilty to misdemeanor drug charges in relation to attempting to purchase cocaine. Commissioner Bowie Kuhn initially suspended him for the entirety of the coming season, but it was reduced on appeal and he returned May 15, 1984. The other players he was charged with, Willie Aikens, Vida Blue and Jerry Martin, were quickly jettisoned, with Wilson hanging around Kansas City through 1990.

In 2000, Wilson was inducted into the Kansas City Royals Hall of Fame.

Wilson was a coach for the Syracuse SkyChiefs in 1997, South Bend Silver Hawks in 2001 and Lancaster JetHawks in 2002 [1]. He was manager for the London Monarchs of the Canadian Baseball League in their lone, doomed 2003 campaign; the team was leading the league at the time of the circuit's collapse.