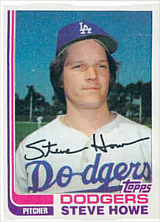 "The guy had electric stuff. He was a power guy who came right at people..." - Rick Honeycutt

Relief pitcher Steve Howe saved 17 games for the Los Angeles Dodgers in 1980 and won the 1980 National League Rookie of the Year Award. He was part of a string of four consecutive Dodgers players to win the award, starting with Rick Sutcliffe in 1979, and continuing after him with Fernando Valenzuela and Steve Sax. He pitched 12 seasons in the big leagues, but he is best known for being suspended from baseball seven times for various drug offenses.

He attended the University of Michigan from 1977 to 1979, and his time there overlapped with that of Rick Leach and Jim Paciorek. The Dodgers picked him in the first round of the 1979 amateur draft and he made his big league debut less than a year later.

Howe died in a one-vehicle accident when his pickup truck overturned while he was driving in Coachella, CA. He was not wearing his seatbelt. The toxicology report determined there was methamphetamine in his system at the time of death. He was 48.